Although valuations and political uncertainty have me spooked, October was another strong month for the stock market in general and clean energy income stocks in particular.

While my broad income stock benchmark SDY added 1.6% for a year to date total gain of 19.6%.  My clean energy income stock benchmark YLCO did even better, 2.7% for October and 29.7% year to date.  The 10 Clean Energy Stocks model portfolio fell somewhere in between for the month (up 1.8%) but remains unchallenged for the year to date (40.7%).   My real-money managed strategy, GGEIP, lagged as I reduce market exposure in what I consider an increasingly risky market (as discussed last month).  GGEIP was up 1.0% for the month, and 35.0% year to date. 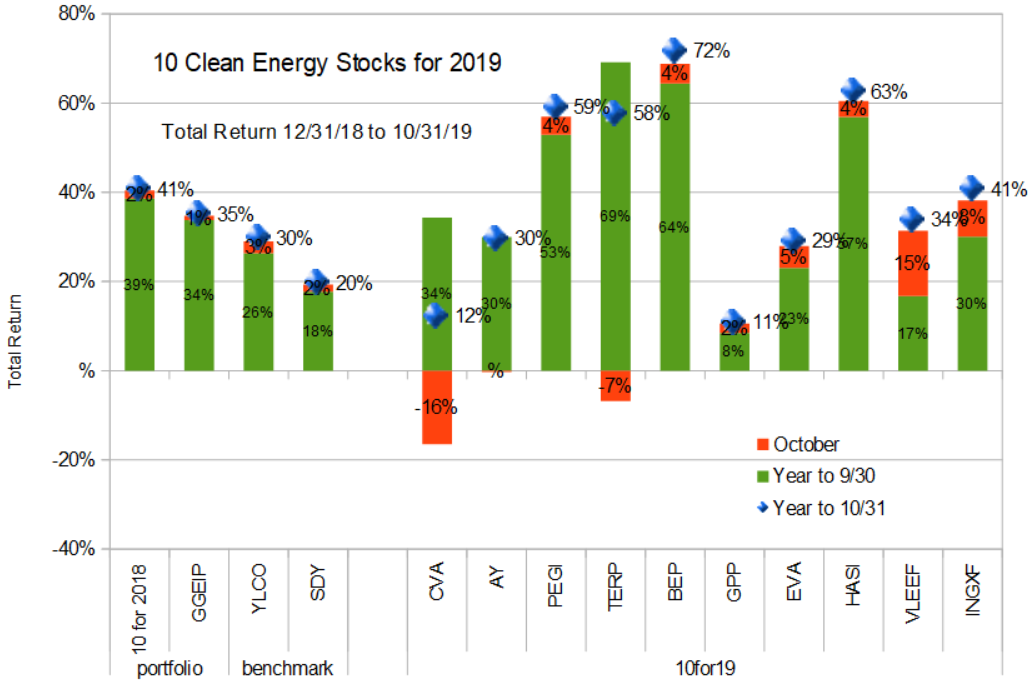 The most notable stock move of the month was Covanta Holding Corp’s (NYSE:CVA) 16% decline.  This started on October 22nd, when Raymond James warned that the company’s earnings would be impacted by the weak commodity market.  The analysts like the company’s long term prospects, but reduced their rating from “Strong Buy” to “Market Perform” based on expected near term weakness.  Sure enough, the company reported weakness in commodity prices in its third quarter earnings.  After earnings, BMO cut its price target from $19 to $18, and UBS cut its from $17 to $15.50.

With the stock trading below $15, I see this as one of the few buying opportunities in the stock market today, and added to my exposure by selling cash covered puts with strike prices of $12.50 and $15.  I think the large sell-off is symptomatic of increasing investor nervousness.  We also saw a similar sell-off in Yieldco Clearway (CWEN, CWEN-A) based on analyst downgrades.

It feels to me that investors are looking for an excuse to sell, causing the market to overreact to analyst downgrades.  Regular followers of this blog, in contrast, will likely have already trimmed their holdings as the stocks rose, and so should remain unphazed by these sudden swings in sentiment.  If you have not been trimming your holdings in your biggest winners, you probably should be. Hannon Armstrong HASI, Terraform Power (TERP), and Brookfield Renewable Energy Partners (BEP) are all stocks in which readers should be considering taking some profits, if they have not already.  I continue to think these three stocks are all ripe for price corrections.

One stock with significant gains where I am not currently taking profits is Pattern Energy Group (PEGI) because a cash buyout announced on November 4th for $26.75 removes most of the market risk from this stock.  Two  months ago, I dismissed the rumors that Terraform Power would be the buyer, but the rumors that the company was in talks for a buyout were well-founded.  The buyers ended up being the Canada Pension Plan Investment Board (CPPIB), which is also negotiating to purchase Pattern Development.

The price of the buyout was below the stock market price at the time of the announcement, but approximately 15% above the price PEGI had been trading at prior to the buyout rumors, which began to circulate in early August.  Because the buyout price was below the market price at the time of announcement, a number of shareholder class action lawsuits were immediately filed.  Investors should not be alarmed at the number of suits; class action lawyers are simply jockeying to be first, because typically most such class actions will be consolidated into one and the lawyers who were first to file generally get to take the lead and collect the lion’s share of the fees.

PEGI and CPPIB need to convince both the judge and shareholders that the buyout price was justified.  They need shareholders in order to win shareholder approval for the merger.  In order to make this case, it is not out of the question CPPIB may increase the buyout price slightly in order to bolster their argument.  But I don’t think that readers should expect this.  As I wrote in August, “At $27, I’d call PEGI fairly valued, so investors should be cautious about banking on a merger going forward.”

Even without a price increase, the merger dramatically lowers the market risk of PEGI stock.  With two expected dividends of $0.4222 before the expected close of the deal, shareholders can expect to receive a total of $27.59 over the next six to eight months.  As I write, the share price is $27.33, which would amount to a 1% gain over that time.  This is not a great interest rate, but it is better than cash, and holders do get the chance of an upward revision to the buyout price.

I continue to remain cautious.  Readers should take some gains in their biggest winners and be prepared for more of their stocks to fall suddenly and dramatically in response to even mild analyst downgrades and short term bad news.  A sharp market correction or bear market could start at any time… or the bull may continue to limp along.  I continue to believe the downside risks outweigh the possible gains of betting that the bull still has much life left in him.