Wind turbines stand tall and mesmerize with their motion. Solar cells bask in the sparkling sun.  Meanwhile, hidden down in the dark dirty underworld, a compelling technology sits quietly and gets no respect.  Once installed it largely goes unseen and, it seems, it’s equally invisible in the world of clean technology press, venture funding and government R&D funding.  Yet this technology provides some of the most intriguing economic returns available for reducing a building’s net energy consumption and I would welcome the right opportunity to fund an exciting business in this category.

What is this Rodney Dangerfield of cleantech?  Geothermal heat pumps, also referred to as ground source heat pumps or geoexchange.  Anyone who has gone down a hundred feet or so in a cave on a hot day probably noticed how nice and cool it was down there.  That is because in most geology, a zone of nearly constant 55-degree Fahrenheit temperature exists 50-200 feet below the ground we walk on.  Even at shallower depths the temperature hovers within a much narrower range than on the surface. Geoexchange is technology that uses the constant temperature and huge heat sink that the earth represents to generate heat in the wintertime and to cool in the summer time.  They leverage technology inside the house that has similarities to your refrigerator (which is, itself, a heat pump).  (more detailed explanation of geoexchange here).

Much like solar and wind, this is not a new technology; it’s been around and used for decades.  Although the economics of a geoexchange system vary from location to location based on geology, local energy rates, and the need for heating/cooling, in most places the payback on a geoexchange system for a home or commercial building beats solar or small-scale wind usually sizably.  Whereas solar or wind generate electricity, geoexchange reduces the consumption of energy for space heating and cooling and also can be utilized to generate hot water. It has near year-round benefit, working when the sun doesn’t shine and when the wind doesn’t blow.  It is “base load” energy savings for a building.  A $1,000-$2,500 annual savings in energy costs for a middle class home is fairly typical, and the CO2 reduction is roughly equal to taking two cars off the road – permanently. 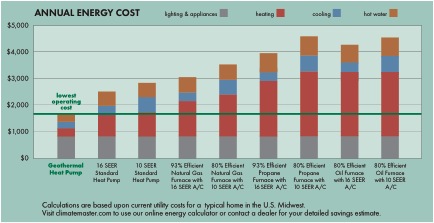 In many markets, a geoexchange system can be installed with paybacks of 10-15 years without any government incentives. By comparison, except in the best markets (high sun, high electricity cost and high state tax incentives on top of federal incentives), solar still struggles today to provide 10-15 year paybacks with government subsidies.

And here’s where it get’s really exciting:  The cost of installing the technology can pay itself back in as little as three years.  A geoexchange system isn’t like that of a solar or small-scale wind system, which almost always has a 100% incremental cost because no existing system is being replaced.  In most climates, buildings need either heat or air conditioning to be usable 365 days a year, and in many climates they need both.  Those systems age and need to be replaced (a 20-year lifetime is typical).  So for a building needing new HVAC equipment, the relevant cost is the incremental cost of the geoexchange system.  Netting out the cost that would have been spent on traditional HVAC replacement equipment in most cases drops the payback calculation down to six-12 years.  Add the current federal 30% tax rebate off the full system cost, and the buyers payback can be an incredible three to six years. 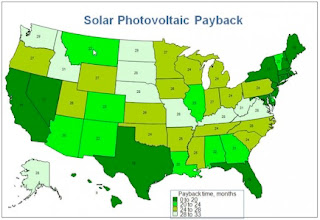 So why is it that solar has received about 33% of all venture capital investment in cleantech and around $1B in government R&D funding over the past ten years while virtually no federal funding or venture capital has gone to geoexchange?  There are several contributing factors:

·      Each geoexchange installation is an “art” project. This is a challenge that the solar industry used to face, when every system required fairly extensive design, engineering and coordination of a potpourri of vendors.  Solar has largely overcome this by better productizing their offerings and streamlining installation; at the same time, the number of solar-focused installation companies has proliferated. Geoexchange has yet to mature in this manner, and many of the companies in the space are largely traditional HVAC vendors that can do geoexchange.

·      Out of sight, out of mind.  One might think this is a good thing, but I suspect that it hurts geoexchange.  Your neighbor who spent $25k on his solar system is proud to have it on his roof, advertising that he’s green.  But no one knows about the neighbor who invested in a geoexchange; after the drilling rigs leave, nobody can see the good deed being done for the environment.

·      < i>Fragmented, unfocused installers.  Geoexchange systems are installed by a hodgepodge of mostly small HVAC contractors.  Because most don’t focus exclusively on geoexchange, there isn’t a strong marketing and sales engine to streamline the sales and installation process.

·      A misconception that geoexchange is “low tech.” What technology advancement could there be in putting pipes into trenches or holes to capture or dissipate heat?  The common view is “not much.”  But the process of heat transfer is a complex engineering challenge that could include advanced materials, fluids and designs to enable increased efficiencies, reduced materials and reduced installation costs for a given performance level.  I believe that technological advancements and economies of scale could result in a reduction in geoexchange system costs of 20-50% with a directly corresponding drop in payback time.

On the last point, it is truly a shame that there isn’t any federal R&D spending going to innovative technologies in this area.  I would love to find an innovative geoexchange company with compelling technology advantages, innovative financing tools and a great management team that could build a large national business to invest in.  If you know of any, send them my way.  I promise I’ll show them some respect even if I can’t promise that we’ll invest in them.

David Gold is an entrepreneur and engineer with national public policy experience who heads up cleantech investments for Access Venture Partners (www.accessvp.com).  This article was first published on his blog, www.greengoldblog.com.

The Big Win You Missed

The Basics of Residential Clean Energy For Realtors and Homeowners