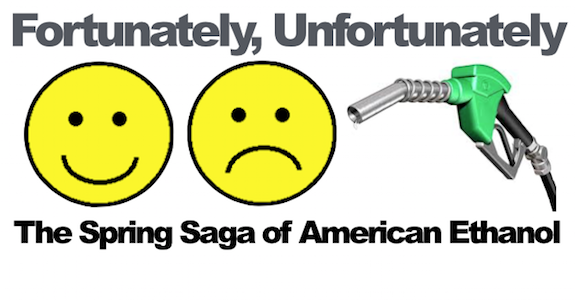 The ethanol signals from Washington DC are more inexplicably mixed than cocktails with names like Sex on the Beach. Let’s parse through the wigwagging over the future of American biofuels supply and demand — ethanol and otherwise.

In Washington, President Trump endorsed year-round E15 ethanol availability as an emerging compromise between oil refiners and US farm sector.

The Renewable Fuel Standard is a federal program that requires transportation fuel sold in the United States to contain a minimum volume of renewable fuels. The RFS originated in a bi-partisan Congress with the Energy Policy Act of 2005 and was expanded and extended by the Energy Independence and Security Act of 2007.

US RFS volumes have been stalled owing to the difficulty of moving from E10 to E15 ethanol blends — primarily outdated regulations that have led the US to an E10 saturation point at around 15 billion gallons.

Jubilant reaction from the US ethanol sector

“We are certainly pleased to hear reports the president has endorsed year-round use of E15, providing consumers access to a higher octane, lower priced fuel option. It will be welcome news to consumers across the country, farmers who have worked to build value-added markets here at home in the face of increased uncertainty in export markets, and the investment community that has received conflicting signals regarding future markets for next generation biofuels. If true, the report suggests President Trump intends to fulfill his commitment to a 15 billion gallon RFS.”

“ACE has been calling for a legislative or administrative fix to this outdated regulatory burden for a long time now. We’re grateful the president has publicly expressed his support to help the industry move in a positive direction. Allowing the sale of E15 year-round is not only a commonsense step to provide regulatory relief to retailers, it is a win for their customers, who save about a nickel to a dime with each gallon of E15 at the pump. It is also the quickest way to take pressure off RIN prices. E15 blending nationwide will increase ethanol blending which will increase the supply of RIN credits and help bring down their price.”

“We applaud President Trump for embracing a common-sense fix to create a level playing field for cleaner, more affordable fuel options during the summer driving season. The White House clearly understands that RVP relief will expand a growing market for America’s farmers while letting consumers pick the fuel of their choice. This simple fix allows retailers to offer better options alongside traditional blends all year long.”

“We applaud President Trump for calling for regulatory reform that will permit year-round, nationwide sales of E15.  This action will grow biofuels and create market demand for the commodities raised by farmers struggling with economic hardships across the Midwest. Small refiners already received their reprieve through recently exposed waiver requests from the EPA. We are grateful President Trump is following through on his commitment to protect the Renewable Fuel Standard and support rural America.”

“The president clearly understands the need to help farmers, particularly after the EPA’s backdoor handouts destroyed a huge share of the market for biofuels. He knows that rural communities are hurting, and this is an easy way to help, simply by lifting an outdated regulation against wider choices at the pump. But refiners have held E15 hostage for years, and they always want more. For this to help farm families, it will be important that the White House continues to steer clear of refiner-backed changes that would gut the RFS.”

But the mood was less ebullient at the National Biodiesel Board, which joined the American Soybean Association and the National Renderers Association with concerns surrounding the seeming inconsistent signals from the administration.

“Recent Actions by the EPA have undermined President Trump’s commitment to support consumer access to domestic renewable fuel and rural economies supported by upholding a strong Renewable Fuel Standard,” said Kurt Kovarik, vice president of federal affairs. “The EPA’s decision to give large, profitable refiners free passes are hurting biodiesel producers, renderers and farmers. If the President is serious about keeping his promise, he needs to pay attention.”

The letter states, “Contrary to your steadfast support, the EPA has undermined the RFS through recent actions granting so-called “hardship” exemptions designed for small refiners.  This has a direct impact on consumers, renderers, fuel marketers, biofuel producers and hundreds of thousands of American soybean farmers. The actions taken by the EPA undermine the integrity of the RFS and stand in direct contrast to your pledge of support in Iowa.”

Press coverage has indicated the EPA has granted exemptions to several refineries for the 2016 and 2017 compliance years, including one of the nation’s largest. EPA has apparently granted Andeavor a hardship waiver for its three smallest refineries, while their profits last year were approximately $1.5 billion dollars. At least two other refineries with hundreds of millions of dollars in annual profits appear to have also been granted exemptions.

The US House Energy and Commerce Subcommittee on the Environment is holding hearings this Friday on “High Octane Fuels and High Efficiency Vehicles: Challenges and Opportunities.” The American Fuel and Petrochemical Manufacturers is expected to testify in support of higher octane, but only to the degree the standard can be met with petroleum.

Commenting on the position likely to be presented by witnesses for the oil industry tomorrow, Renewable Fuels Association chief Bob Dinneen said, “It will be a typical bait-and-switch from the refiners. They say a 95-RON standard could be good for biofuel producers, while also maintaining refiners could meet such a standard with current refining assets and not an additional drop of ethanol.”  The oil industry has readily admitted that using refinery processes and aromatic hydrocarbons to increase the octane rating of gasoline would result in higher refinery CO2 emissions, undermining the very purpose of vehicular GHG standards.

RFA also called into question whether 95 RON is a high enough octane rating to deliver the engine efficiency gains and emissions reductions sought by automakers. For example, Dan Nicholson, a General Motors executive who is testifying at the Friday hearing, has previously stated, “Higher octane is necessary for better engine efficiency…100 RON fuel is the right fuel for the 2020-2025 timeframe.” Dinneen’s full comments are here.

Meanwhile, Growth Energy CEO Emily Skor added that “With a natural 113 octane, ethanol has a lower carbon content than the gasoline components it replaces and provides increased engine efficiency to reduce both tailpipe, greenhouse gas, and criteria pollutant emissions. Growth Energy has been a leader in pushing for higher octane, midlevel ethanol blends. We submitted the first proposal for a 100 Research Octane Number (RON), E30 fuel nearly 7 years ago.

“Robust research by national labs, automakers, and other scientific institutions has explored the myriad benefits of high-octane fuels and specifically a midlevel ethanol blend in the E20 to E30 range. When paired with various higher compression ratio engines, these fuels increase vehicle engine efficiency, lower tailpipe emissions, and increase use of renewable fuel. Her comments in full can be found here.

The Renewable Fuel Association’s EVP Geoff Cooper has been pointing industry towards ethanol demand destruction for some time. Looks like the EPA’s latest moves may well be contributing towards a significant undermining of renewable fuels demand,.

“Over the past few weeks our concerns have been confirmed that the Environmental Protection Agency is secretly handing out RFS compliance exemptions to virtually every owner of a “small refinery” who comes knocking.,” Cooper writes in his latest post. “One refining executive went as far as saying the EPA “…was handing out those exemptions like trick or treat candy.”

“As we have pointed out, these recent EPA actions are rapidly destroying demand for ethanol and corn. The small refiner exemptions, the PES settlement, and EPA’s failure to enforce the statutory 2016 RFS requirement (as ordered by the courts) have effectively reduced the 2016 and 2017 RFS volumes each by 1 billion gallons or more. The result has been a glut of unneeded RIN credits and sharply lower RIN prices.”

“The EIA data show that after peaking at a record of 10.57% in the last week of November 2017, the average ethanol blend rate has trended lower. In fact, the blend rate has been below 10.0% for 17 straight weeks dating back to mid-December 2017. Cooper’s complete comments are (as always) a must-read, and can be found here.

The Trump Administration’s goal seems relatively straightforward. Grant the US ethanol industry access to a larger market through year-round E15 availability ·which might ultimately support higher mandate levels), while exempting large numbers of small refiners from compliance. In short, shift more energy production to the agriculture sector (especially as it reduces petroleum imports), but placing the burden upon the largest refineries.

At the same time, Congress is beginning to investigate perhaps for the first time the idea that high-efficiency vehicles could be achieved by a combination of fuels and vehicle deign. That’s the underlying premise of the DOE’s Co-Optima program – advanced fuels for advanced vehicles. And E30 ethanol may well be a sweet spot that offers a cost-effective fuel whose enhanced octane levels enable high-compression engines that deliver far more miles per gallon than today’s designs.

These are early days, but there are hopeful signs out of Washington for the first time in many years — that’s on the “fortunately” side. But there are too many “unfortunatelys” around to keep the US biofuels industry and its farm sector supporters vigilant on policy evolution.