DC Fast Chargers (DCFCs) and Tesla superchargers are a key element in electric vehicle (EV) charging infrastructure that could facilitate wider adoption of EVs by enabling recharging that comes to resemble the time currently taken for gas station stops, and thereby reducing “range anxiety” for drivers.

However, the pricing structure for electrical costs incurred at commercial DC fast chargers is currently prohibitive, because it includes a special fee called a “demand charge”. Rate design in a number of states includes this additional charge, based on the “peak rate” on electric power consumed in kW. In New York, demand charges are determined from max instantaneous demand, the amount used in any 15-30min segment in a monthly billing cycle (not from coincident peak demand which is user demand that coincides with peak system demand). This is a separate factor, distinct from the volume of electricity actually consumed, which as priced in kWhs and referred to as the “volumetric charges”.

DCFCs by contrast are “low utilization” enterprises, with low monthly load factor at current low levels of EV penetration, despite high capacity factors. DCFC load profiles are intermittent and random, as compared to the load profile for typical commercial entities driving demand. Consequently, peak instantaneous demand only rarely coincides with periods of demand congestion. Demand charges for DCFCs not only fail to align with the cost of delivering power, they are so disproportionate as a percentage of costs that even the NY Power Authority recognizes that the business proposition is rendered infeasible, precluding a viable case for DCFC investments.

Two examples of the calculations demonstrate the problem – one included in a recent NY Power Authority petition to the Public Service Commission, the other in a Mckinsey consulting analysis (How battery storage can help charge the EV market) as shown in the graphic below. 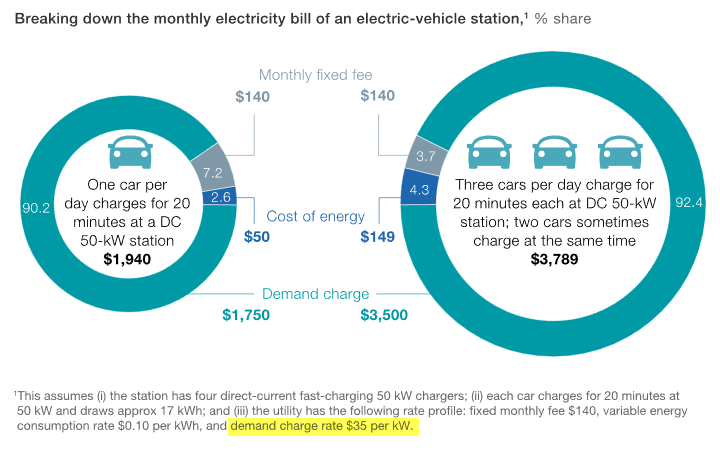 Comparing the two examples in the table below, the NYPA version shows that demand charges constitute almost 80% of costs, which are roughly confirmed by the 90% shown in the McKinsey version.  The ratio is not improved by 3x scaling as shown in the graphic, because the increased utilization also raises the total instantaneous demand.

As currently structured, in NY as well as in other states facing similar considerations, it is increasingly recognized that demand charges applied to low utilization, intermittent DCFC stations do little to mitigate impacts to peak load, but rather result in disincentives to development that are inconsistent with other state goals. In New York, a goal of 800,000 electric vehicles by 2025 was set under the Multi-State Memo of Understanding, and since there are less than 30,000 on the road in 2108, in order to add 110,000 EVs per year for the next 7 years, some dramatic  incentives will be needed to accelerate infrastructure penetration and EV adoption.

A Rocky Mountain Institute study from Oct ‘17 contended that eliminating demand charges for DCFCs is consistent with societal objectives of vehicle electrification. Creating a business opportunity for companies that provide public EV charging is a societal objective and hence these companies should be able to earn a reasonable profit providing a valuable service & maintaining publically available charging equipment. Even if volumetric tariffs for public DCFCs does not recover all system costs incurred, some costs could be justifiably recovered from general customer base, because DCFC’s provide a public benefit in air pollution reduction & other local economic benefits.

Rather than designing a tariff by building up from cost basis of the utilities, RMI proposes instead to work down from a cost that would be attractive to EV drivers. Find a consumer cost target, deduct a reasonable profit margin, & set that as the rate ceiling for public DCFC owners. Any shortfall in utility revenue for actual costs of service could be recovered from the general customer base on a cost basis only, which would also recognize numerous EV-grid value streams, including benefits to the grid from “smart charging” EVSE’s and the value of enabling greater renewable energy penetration. As emerging EV telematics technologies evolve, a more precise quantification of the value streams in the EV-grid interaction can result in a more sophisticated & granular tariff design. NYSERDA offered a 2015 report with similar contentions Electricity Rate Tariff Options for Minimizing DCFC Demand Charges

If this regulatory shift can be achieved, an accelerated transition to electrification of transportation is being envisioned in some interesting media.   NYPA offers a vision for DCFC corridors that can provide 200 miles of range in 10 minutes of charge.  Tesla has the most evolved vision for DCFC infrastructure, with over 1200 supercharger stations and 10,000 superchargers globally, and is promoting 3rd party development of charging convenience stops.

Other extensive DCFC charging networks are being developed with similar visions for providing sufficient charging services to accommodate massive adoption, including:

For charging station developers, the battle is being waged on two fronts: 1) to change the Demand Charge regulatory environment and 2) to develop charging facilities that integrate battery storage to benefit from time of use charging, and peak shaving discharge to smooth the load profiles and thereby avoid or reduce Demand Charge pricing, supplemented by PV generation on solar carports.  Peak smoothing has the potential to significantly reduce the burden of demand charges, even if there is no regulatory relief, as shown in the calculations below, in this estimate by 73%. 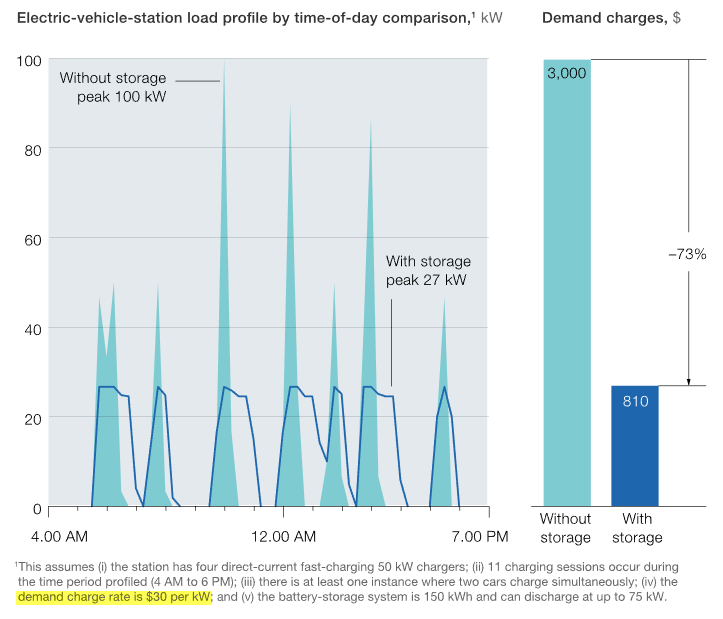 Perhaps the most forward looking is the vision of tech firm ZapGo, which is developing carbon ion supercapacitors that will be integrated with batteries to enable very short charging times, both for end user vehicles and for supply trucks envisioned be able to deliver fast recharging of bulk storage in filling station environments. 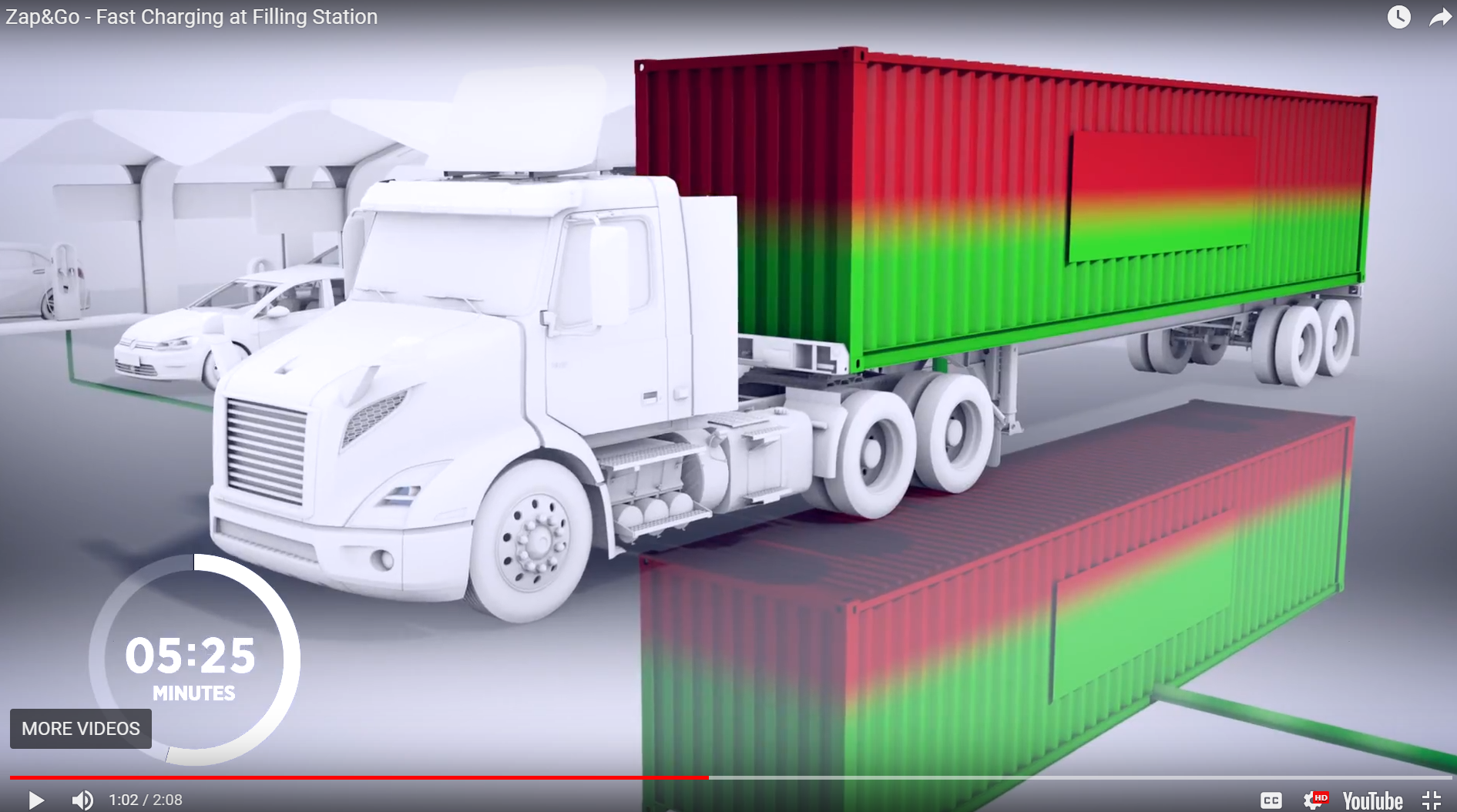 Both technology and regulatory solutions need to be aggressively pursued in order to achieve the goals being set forth, for reduction of GHG’s and dramatically increased electrification of transportation. 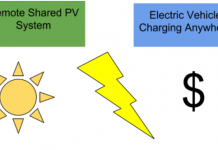