January 2020- where do I start?  A year of market-shaking news in a month.

The Brink of War

The month started off with a literal bang when Trump decided that a good way to distract the public from his impeachment trial would be to try to start a war with Iran by assassinating one of Iran’s top military leaders, Qassem Suleimani.  A week later, the world and markets heaved a collective sigh of relief when Iran decided that their honor had been satisfied with two missile strikes on US bases.  While Trump reported no casualties, Iran’s Foreign Minister Javad Zarif said Tehran “concluded proportionate measures in self-defense and waged a propaganda campaign on state run and social media that spread rumors that casualties had been widespread.”

While we should be increasingly concerned about Iran’s (and many other actors’) ability to manipulate public opinion with social media, in this case, making the Iranian people believe that their counter-attacks had damaged more than property seems to have allowed the Iranians to avoid a cycle of escalation which would have likely led to war between the US and Iran.

Soon after, I thought the theme of this month would be fossil fuel divestment entering the mainstream. Blackrock (BLK) CEO Larry Fink’s letter admitting that “Climate [c]hange become a defining factor in companies’ long-term prospects.” is a watershed moment for the investment management industry.  There is no investment manager more mainstream than Blackrock, which tops the list of investment managers by assets under management.

While the steps that Blackrock plans to take (divesting from coal, engaging with companies on sustainability) are timid and incremental, the admission by this investment behemoth that climate change is key to companies’ long term prospects has fundamental implications far beyond the actions that Blackrock says it will take.  This is because, as a fiduciary, Blackrock’s first responsibility is to look after its clients’ interests, something the mainstream investment industry equates with investment returns.

I personally feel that the steps Blackrock has promised are far from adequate, but I believe that this statement means that Blackrock analysts, no matter what their personal views, will start taking climate risk seriously in their analyses.  I feel that way because it happened to me.  I started taking climate change seriously as an investment risk in 2005, and it quickly became the guiding theme of my entire investment practice.  I doubt that will happen to Blackrock, but I know that once you take a serious look at Climate risk, you never see the investment landscape in the same way again.

Climate change was also a focus of this year’s World Economic Forum in Davos.  This opportunity of the world’s moneyed elites to rub shoulders is another indicator of what those elites are thinking about.  Since thinking about climate change is much more common among European money managers than those in the US, it may also help to bring the Americans realize that this is not some fringe movement pushed solely by radical activists.

Now that big money seems to be beginning to take climate change seriously, it’s giving cover for smaller money managers to reverse long held positions against doing the same.  New York State comptroller Tom DiNapoli seems to have dropped his long opposition to fossil fuel divestment when he announced that the  New York State Common Retirement Fund is reviewing 27 thermal coal mining companies to determine whether they are taking steps to transition to a more sustainable business model in line with the growing low carbon economy.”

For smaller and more nimble investors, the changing investment climate is an opportunity.  Rather than spending months “reviewing” the plans of fossil fuel companies, we can take the simple step of getting out while the getting is good.  Small investors had the opportunity to get out of fossil fuel companies before their declines started in 2011 (for coal companies) and 2014 (for oil), but when large investors like Blackrock and pension funds see the climate writing on the wall and begin to sell in earnest, there will send fossil fuel stocks plummeting further.

The economy is transitioning away from fossil fuels.  How long that takes is an open question, but as the transition happens it reduces these companies’ prospects of long term earnings.  Yes, as long as current cash flows are good, these companies will be able to transition to more sustainable energy, but for me it has always seemed much simpler to transition my portfolio first, rather than waiting for the companies in it to eventually see the light and try (many unsuccessfully) to make that transition themselves.

While big money managers slowly come to that conclusion, small investors have the opportunity to move first, and sell any fossil fuel companies they still own while there are still investors willing to buy them.

If coming to the brink of war and early signs that mainstream asset managers are waking up and smelling climate change in the air were not enough, investors spent the last two weeks coming to grips with the possibility of a pandemic.  The novel Coronavirus originating in China’s Wuhan province is clearly both highly infectious and often deadly.

China’s economy and world trade are already being disrupted by the efforts to stop its spread.  The longer it takes to bring the disease under control, and the farther it manages to spread before we do, the more significant the impact on world growth.  Oil prices are already falling in response to the anticipated decline in travel worldwide, and if the pandemic spreads beyond the few cases reported here so far, it will likely disrupt the economy and could easily precipitate the end of the long bull market.

All the bad news has had its effect on the stock market.  My broad income stock benchmark, the SPDR S&P Dividend ETF (SDY) is down 2.9%.  Clean energy income stocks bucked the trend, quite possibly due to the growing moves towards divestment.  My clean energy income benchmark, YLCO gained 3.6% for the month, while the model portfolio is up 3.0% and the real money Green Global Equity Income Portfolio I manage is up 2.9%. 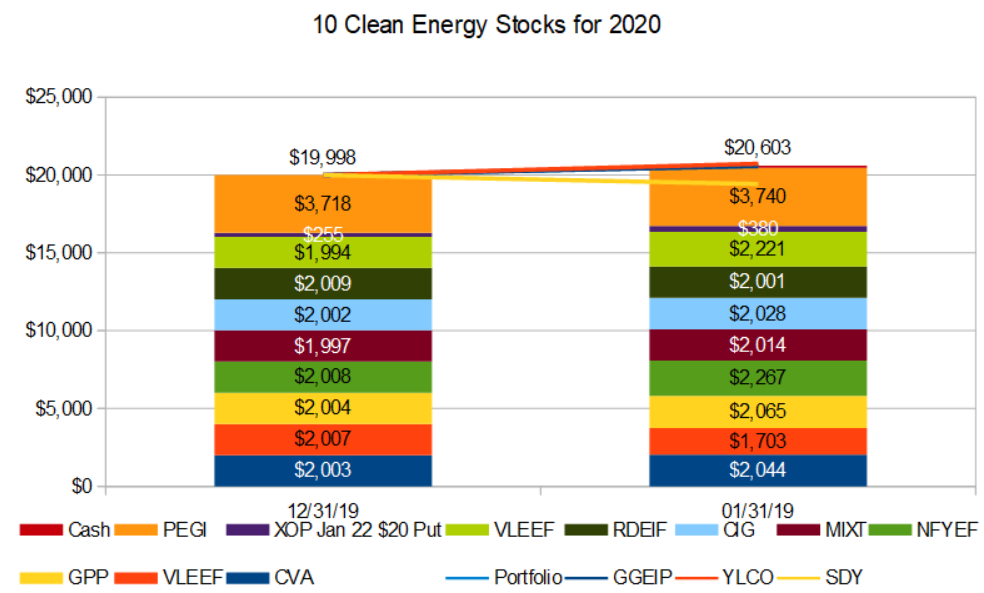 The two hedging positions in the portfolio performed well, with the January 2020 $20 Put on SPDR S&P Oil & Gas Exploration & Production ETF (XOP) rising from $2.55 to $3.80 as XOP dropped from $23.70 to $19.16.  Pattern Energy Group’s (PEGI) buy out by the Canada Pension Plan Investment Board progressed with the company setting the date to vote on the merger for March 10th. This caused the stock to rise slightly despite being knocked back a little by the announcement of what looks to be like a nuisance class action lawsuit announced on January 28th.

The largest decliner in the portfolio was unsurprisingly Valeo SA (FR.PA, VLEEF, VLEEY), a French auto-parts maker which is very sensitive to changes in the global economic outlook.  Despite the volatility of the auto parts market, this company has been making progress and taking market share while others contract.  January’s price decline just makes it more attractive… at least as part of a portfolio which is otherwise positioned for a market downturn.

The biggest winners were NFI Group, Inc. (NFI.TO, NFYEF) (up 13%) and Veolia Environnement S.A. (VIE.PA, VEOEF, VEOEY), up 11%.  New Flyer’s move seems to be more a valuation driven rebound from a long decline in 2019 than any news-driven event. Veolia’s move continues a rise that began from lows in late 2018, but also does not seem to be related to news.  The company bought a hazardous waste business from Alcoa for $250 million at the start of the month, but a transaction that size is pocket change for a company like Veolia with $27 billion in annual revenue.

None of the other stocks in the portfolio made particularly big moves, with the exception of MiX Telematics (MIXT).  The provider of vehicle tracking and telematics services rose for most of the month, until it reported its third fiscal quarter earnings on January 30th.  One of MiX’s largest customer segments are international oil and gas companies, an industry which has been struggling to maintain profitability.  This led to many customers temporarily reducing the number of their vehicles in active service to save on costs.  One of these costs is MiX’s subscriptions.  If and when the industry turns around, these subscriptions will likely be re-activated, but MiX cut its outlook for growth in 2020 and the stock gave back all the gains it had made earlier in the month.

All in all, January was a very exciting month for stock market investors, and excitement in investing is not a good thing.  With 2020 barely begun, we have had a year’s worth of market moving events, and doubtless more to come.  Yet despite the wobbles of the broad market, the growing divestment trend seems to be keeping the clean energy relatively resilient, and this model portfolio was designed with the idea that a 2020 bear market was a distinct possibility.

It’s been a bumpy ride, but so far, so good. 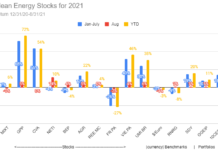 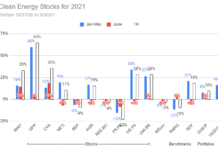 Finding a Bottom and Model Portfolio First Half Returns