Last week I warned “The risks in today’s stock market outweigh the possibility of future potential gains.”  Looks like we’re seeing those risks manifest in short order.  The last couple days’ decline have me looking at a few stocks to start adding to my positions again, especially MiX Telematics (MIXT) discussed on June 2nd and Green Plain Partners (GPP), discussed below.

Note that this pullback could easily be very early days of a much larger market decline.  We might even see the market fall far enough to test the March lows… any of my buying now is just small amounts, with most of my buying power held in reserve.  As I wrote last month, I balance the level of my buying or selling against my confidence in the valuations of the stocks in question and my predictions of market trends.  Right now I think we’re starting to see some good values in a few stocks again, but I think it’s likely that we will see much better valuations in the weeks or months to come, so I am mostly holding on to my cash and waiting for better values to be created by continued declines.

On the other hand, there’s also a chance that we’ll see an immediate rebound in the next week, which is why I’m doing a little buying now.

The three updates on the individual stocks in the model portfolio which I wrote for my Patreon supporters earlier this week:

On April 28th, I published Covanta and Green Plains Partners Don’t Let A Crisis Go To Waste about the two companies’ dividend cuts.

The main reason for GPP’s dividend cut was to enable it to refinance and pay down its debt.  I wrote:  “Green Plains Partners needs to replace its revolving credit facility before it matures on July 1st.  Under normal circumstances, I would not be concerned about the prospects of replacing the facility, but this year is not what anyone would consider normal circumstances.  …  GPP has made significant progress in its negotiations with lenders, and that the dividend cut is part of what was needed to get the lenders to agree to extend credit.”

The company completed its refinancing on Thursday, June 4th, something I had predicted would result in “significant stock price gains in the near term” if the refinancing were successful.  As I write on April 8th, GPP is up 78% (total return) from the close on April 28th when I published the above article, compared to an increase of 12% for the S&P 500.

Now that the short term gain has happened, we need to re-assess the value of the stock.  The current $0.48 annual dividend amounts to a 5.3% yield at the current $8.94 stock price.  That is a little low for an MLP.  The other renewable energy MLP I own, Enviva (EVA) currently pays an 8% yield, and it is on more solid financial footing than GPP.  EVA has been raising its quarterly dividend by 1/2 of a cent to 1 cent a quarter, or about 4% on an annualized basis.

A reasonable guess would be that Green Plains Partners will be paying a $1/year annual dividend in 2 years, and will give guidance for 10% annual dividend increases for several years going forward at that point.  If I am right, I would value the stock at somewhere between $12 and $20 in 2 year’s time.  Discounting back two years at 10% minus the current 5.3% yield, I arrive at a current valuation of $11 to $18.

Given that valuation, I will start selling a little of my current (large) position if the stock reaches $11 in the next few months, and continue selling more if it rises from there.  If Green Plains Partners somehow rose above the top of my valuation range (I don’t expect this) in the near term, I would sell my entire holding, with plans to re-acquire if it fell back later.

For now, I’m comfortable holding at $9 and (barring a renewed stock market decline) expect the stock to rise over the next week as investors digest the good news.

Sustainable Infrastructure financier Hannon Armstrong has been operating well with a remote workforce since early in the pandemic.  It reported strong first quarter results on May 7th, and is unlikely to suffer more than minor impacts from the coronavirus shutdown.  Nearly all the infrastructure it finances is essential, and Hannon Armstrong is generally quite senior to other suppliers of capital of the projects it finances, so temporary dips in wholesale power prices and the like are unlikely to significantly affect its revenues.

To the extent infrastructure projects are delayed, funding of new project is likely to be lower in the second quarter, and possibly longer, but the bulk of Hannon Armstrong’s income comes from previously financed projects.

In the medium term, the prospects for new infrastructure to finance look very bright, since both Democrats and Republicans are talking about an infrastructure package to boost the economy.  While such a package may not be explicitly targeted towards sustainable infrastructure if the Republicans remain in control, here will inevitably be some sustainable projects that get done and need financing which Hannon Armstrong can provide.

After I added a cash covered put on HASI to the model portfolio at the start of April, the stock has rapidly roared back as the market recognizes the good news outlined above.  With the stock bouncing around $30, I consider Hannon Armstrong to be fairly valued.  As the many cash covered puts I sold in my manage portfolio (GGEIP) with strike prices in the $17.50 to $22.50 range expire over the coming months, I will be looking to replace them if the stock price dips, perhaps as a part of an overall market pullback.

I was fairly bullish on Coventa Hodling Corp’s (CVA) prospects in my April 28th article on its dividend cut.  I expected that the majority of the company’s revenues would be stable because they come from tip fees for residential trash.  I thought other sources of revenue (energy sales, recycled metals, and commercial tip fees would be impacted), but there was some potential upside in the “profiled” waste segment due to additional medical waste caused by the covid-19 pandemic.

Here’s how Covanta broke down the impact in a recent presentation: 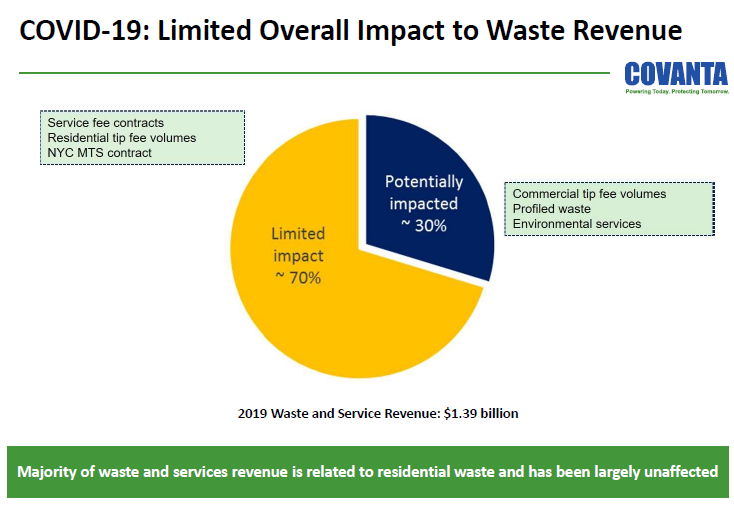 Looking ahead, Covanta had been spending substantially all of its pre-covid cash flow to pay its $1 annual dividend, which has been cut to $0.32.  I do not expect Covanta to return its dividend to the old level even when the effects of the pandemic are passed, but rather to retain most of the remaining free cash flow to fund its investments and pay down its substantial debt burden.

At the current market price of $9.81 (up 26% from $7.76 on Apr 28th, compared to a 12% rise in the S&P 500) , this amounts to a 3.3% dividend, which I expect Covanta will begin to raise at something like a 5% to 15% annual rate so that it can begin to acquire a reputation for consistent dividend growth.  A 5% dividend growth rate could probably be maintained permanently by also growing revenues and reducing interest expense with the retained cash flow.  I think a 10% dividend growth rate or significant stock buybacks are more likely because the company will have a lot of room to increased the dividend for years because of the recent cut, and long term dividend increases at double-digit growth rates are a reliable way for a company to boost its stock price and use it to raise cheap equity capital.