The North American biofuels industry experienced the fewest merger and acquisition transactions in recent history in 2017. There were only six M&A transactions, with a total estimated value of more than $100 million. They involved eight plants with 297 million gallons per year (MGPY) of production capacity. Half of these deals were for non-operating plants. A fourth deal was for a sub-scale demonstration plant. Contributing to the limited deal flow, two historically active acquirers, Green Plains and REG, did not close a deal in biofuels in 2017. Also, ADM’s strategic review of its fleet of dry mill ethanol plants did not materialize into a transaction. The valuation levels of all cited 2017 deals were less than construction costs, underlining the distressed nature of the deals.

All of the expansion and new project developments attest to the overall health of the sector and bullish sentiments of owners.  Ultimately, established players building more capacity is consolidation through organic growth rather than through acquisitions.

Instead of buying plants in 2017, many players focused on expanding the capacity of their existing assets and developing new projects. Ocean Park tracked an estimated 1 billion gallons per year (BGPY) of announced biofuels plant expansions and greenfield projects in 2017, representing 6 percent of industry capacity growth, dwarfing the 297 MGPY of M&A activity.

During the year, 13 ethanol companies announced or began construction for 622 MGPY of new capacity, the largest by Elite Octane’s 120 MGPY plant in Atlantic, Iowa. Additionally, POET and Ringneck Energy each broke ground on 80 MGPY projects, with POET expanding their Marion, Ohio facility and Ringneck Energy starting new construction in South Dakota. In the biodiesel and renewable diesel sectors, 11 US companies either announced or completed 330 MGPY of new capacity in 2017. The two major biodiesel and renewable diesel announcements were:

It is unclear why producers decided to build instead of buy new capacity through M&A. One possible explanation is that many of the projects were expansions or co-located, which would drive better economics than buying distant plants.

It was also a quiet year for advanced biofuels transactions with only three small deals completed.

During the past five years, an average of over 500 MGPY of capacity has changed hands annually through M&A. The year 2017 was by far the slowest year for ethanol M&A in the last decade. Only one operating commercial-scale ethanol plant was sold last year. The three transactions in 2017 involved three plants with 202 MGPY of capacity: 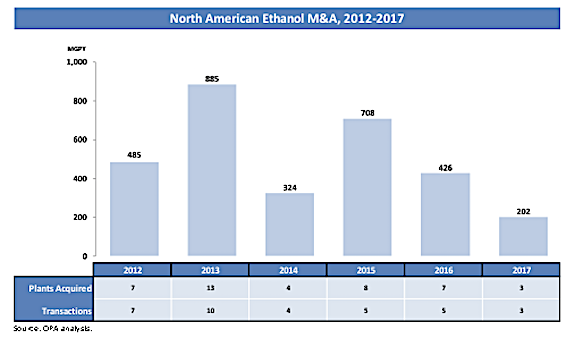 Following 2016, the busiest M&A year in the last decade for biodiesel, only three transactions closed in 2017. Similar to ethanol, only one of the transactions was for a commercial-scale, operating plant. A summary of 2017 biodiesel transactions follows: 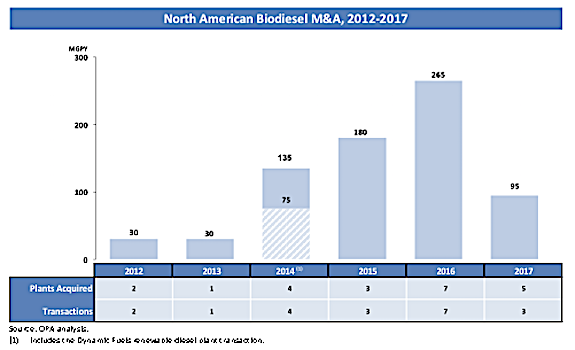 Ocean Park tracked three M&A transactions in the advanced biofuels space during 2017. No plants traded in 2017. Instead, the three deals involved technologies or niche markets:

Regulatory: 2018 starts out with the looming question regarding the extension of the biodiesel Blenders Tax Credit (BTC) that expired at the end of 2016. A retroactive extension would be worth a few billion dollars to the biodiesel and renewable diesel supply chain. Elsewhere in renewable fuels policy in the US, there was less change to the RFS2 than industry participants feared could result from the new Trump Administration and new Congress.

Ethanol: Like 2016, ethanol margins were fairly robust in 2017, so most owners were content with their assets. Reinvestment in expansions was a key theme. Will owners continue to decide to build new capacity or expand existing plants instead of acquiring assets? If so, look for 2018 to be another slow year for ethanol M&A. It is possible that some of the non-strategic owners in the industry may at least test valuations of their assets. In the long term, the US ethanol industry is still relatively fragmented, so Ocean Park expects consolidation to eventually continue. There are still 90 stand-alone plants that account for 5.6 BGPY of production, or 35 percent of the 15.8 BGPY of domestic production.

Biodiesel: The US International Trade Commission ruling against biodiesel imports from Argentina and Indonesia created an opportunity for domestic producers to replace over 600M gallons of biodiesel imported by those two countries (figures represent full-year 2016). However, the uncertainty of the return of the BTC offsets the potential profitability of the reduced imports. No operating biodiesel plants in the US changed ownership in 2017. The large soy producers view biodiesel production as an integrated component of their soy operations. REG was on the M&A side-lines in 2017. Will they return to buying plants? Will international players acquire US biodiesel assets? Ocean Park expects strategic players to be opportunistic acquirers of assets that fit their geography and feedstock supplies.

Advanced Biofuel: Oil and fuel prices in their current range pose a challenge for advanced biofuels business plans that require raising capital. There are more exits and unfunded business plans than actual operating plants. One notable exception was Fulcrum BioEnergy’s equity and debt raises during the year. Some of the major oil companies have started to look at advanced biofuels technologies, but it is a low level of activity. Compared to 2017, Ocean Park expects more distressed and divestment transactions in 2018 with maybe a few, cautious new investments to move some of the promising technologies forward.

Ocean Park is a boutique investment bank that advises on mergers and acquisitions, financings and restructurings with extensive experience in the renewable fuels, cleantech, food and agribusiness industries. Ocean Park has completed 25 renewable fuels M&A transactions since 2006. Any securities are offered through Ocean Park Securities, LLC, a member of FINRA and SIPC. Ocean Park’s professionals are licensed registered representatives of Ocean Park Securities, LLC. For more information, please visit www.oceanpk.com.