Trump in a pickle: support his beleaguered EPA Administrator over oil refinery bailouts, or rally his Midwestern farm-state base?

“I’ve supported Pruitt but if he pushes changes to RFS that permanently cut ethanol by billions of gallons he will have broken Trump promise & he should step down & let someone else do the job of implementing Trump agenda if he refuses.”

Grassley explicitly called on Pruitt to back a key campaign pledge from 2016 that helped unlock farm state support and propel Trump into the White House.

The biofuels brouhaha is beginning to lay a shadow over GOP efforts to bolster farm-state support as November elections begin to draw near. 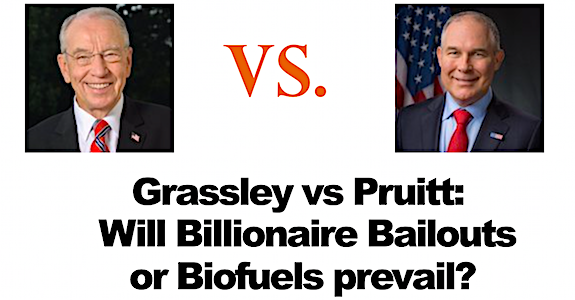 A series of secretive, oil refinery waivers from complying with Renewable Fuel Standard biofuels mandates that have been granted in recent months. The exact number of waivers is unclear, and EPA isn’t clearing up the mystery. Some sources have speculated that as many as 40 waivers have been granted, with as much as 1.3 billion gallons of demand taken off the table, or 8% of US biofuels demand.

As Grassley notes, EPA Administrator Pruitt committed to following congressional intent (15 billion gallons) when he was nominated, and in an October 2017 letter he wrote to Midwestern senators.

And Trump committed at the IRFA Summit in January 2016 that  “The EPA should ensure that biofuel RVOs, or blend levels, match the statutory level set by Congress under the RFS.” A Grassley floor speech quoting Trump is here.

The brinkmanship between Administrator Pruitt and Senator Grassley follows a White House meeting at which President Trump committed to Administration to approving year-round E15 ethanol, but the potential 7 billion gallons expansion in biofuels blending will take time to implement and producers are up in arms over the near-term demand destruction created by the small refinery waivers. More on that deal here.

Under the Energy Security and Independence Act, the EPA Administrator has the right (but not an obligation) to issue waivers to refineries with less than 75,000 barrels per day in production, but only if those refineries can demonstrate severe economic hardship. The biofuels industry and its Midwestern farm-state support base erupted in fury in recent weeks when the EPA Administrator reportedly extended the waivers to refineries owned by companies that had posted more than one billion dollars in annual profit. More on that here.

More background. Details on Andeavor’s $100M RIN savings here. And the $23B buyout of Andeavor (ANDV) by Marathon Petroleum that followed.  And the Advanced Biofuels Association is taking EPA to court over hardship waivers, here.