At the time the facility was capable of pumping out 12,000 barrels of renewable diesel per day that could be dropped directly into Valero’s distribution network and blended with fossil fuel.  Even at that production level the facility showed promise to deliver strong dividends back to its owners.  The partners named their venture Diamond Green Diesel and celebrated the unparalleled achievement. 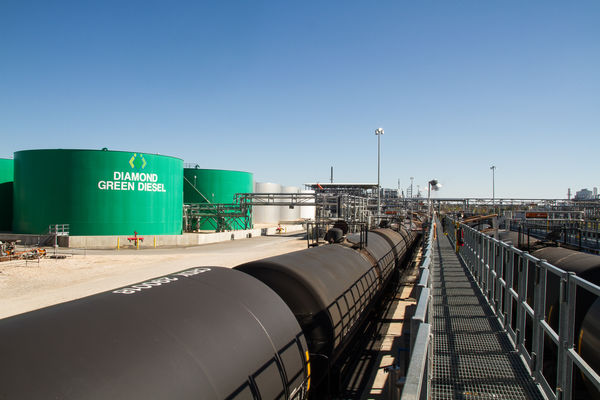 Potential dividends that could be delivered by a plant with a 550 million capacity might be all Darling and Valero need to give the nod to the added expansion project.  In the quarter ending June 2018, Diamond Green Diesel delivered a $25 million dividend to each of the two partners  –  a dividend that drops directly to each company’s bottom line.  The dividend is made possible by strong profit generation.  Cash earnings (EBITDA) were $1.05 per gallon in the quarter even without the benefit of the Blenders Tax Credit.

The Blenders Tax Credit has been the target of intense lobbying over the years.  The U.S. Congress has let the tax credit expire at times despite widespread support from a trade groups and industry associations around the country.  In February 2018, the tax credit was approved retroactivity for the year 2017, at $1.00 per gallon of biodiesel or renewable diesel used to blend with fossil fuel.  Then the fight was renewed for getting the tax credit approved for 2018 and 2019.  A decision is still pending as Congress continues its Hide and Seek game lobbyists!

Diamond Green Diesel proves that, with good management and astute capital investment, there are profits to be made even without government support.  As a consequence, Diamond Green Diesel has not been a victim of the on-an-off support from Congress for renewable fuels.  For other smaller renewable fuel companies, the uncertainty has disrupted access to capital and made difficult long-term operating plans.  Retroactive approvals of the credit have made it possible for investors to assume business models will eventually benefit from the credit, but the inconsistency still disrupts cash flows.

Deep pockets of its two joint venture sponsors are a boon for Diamond Green Diesel.  At the close of the most recent quarter Darling Ingredients reported $104.1 million in cash on its balance sheet, including the $25 million dividend from Diamond Green Diesel.  Darling does have $1.7 billion in debt to service and the debt-to-equity ratio is 72.5%.  However, the company has generated strong operating cash flows  –  $341.1 billion in the twelve months ending June 2018  –  providing ample capital for new investment.

Investors have recognized Darling’s financial strength, driving the price of its shares higher by 9.2% over the past year.  Analysts following Darling appear certain that Darling has even greater success ahead with its portfolio of sustainable food and feed ingredients and renewable diesel. While it appears sales will be as much as 5% lower year-over-year in 2018, top-line growth is expected to resume in 2019.  Even so earnings are expected to more than double in the year 2018 and then growth again by more than 10% in 2019.  At a forward price earnings ratio of 19.5 times, Darling with its promise of earnings growth might be considered a good value.

This article was first published on the Small Cap Strategist weblog on 9/21/18 as “Darling’s Diamond.”