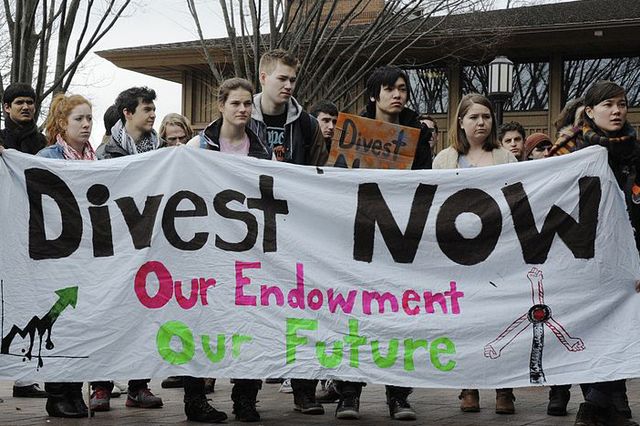 Eighteen months ago, the people who manage the endowment at the John D. and Catherine T. MacArthur Foundation got some bad news: Investments they had made in funds managed by EnerVest, a Houston-based private equity firm that operates more than 33,000 oil and gas wells across the US, had plummeted in value to almost nothing.

The losses were small, relatively speaking — roughly $15 million, a fraction of the foundation’s $7 billion endowment — but they were unwelcome, if only because they called attention to the fact that MacArthur, whose mission is, famously, to build a “more just, verdant and peaceful world,” had taken a financial hit by investing in fossil fuels.

Despite its stature as a major funder of climate-change solutions, MacArthur continues to finance the fossil-fuel industry, a review of its most recent federal tax return shows. It does so deliberately–that is, by seeking out opportunities to invest in oil and gas, unlike investors who are inadvertently exposed to fossil-fuel companies because they own broad-based index funds that capture the entire stock market.

The MacArthur endowment holds investments valued at well over $200m in at least a dozen private equity firms,* including Enervest, that finance the exploration, production and distribution of fossil fuels, according to MacArthur’s 2017 Form 990-PF. (The full scope of its fossil fuel holdings can’t be determined because many private equity and hedge funds do not disclose what they own.) Some of MacArthur’s funds are invested in western Canada’s oil sands, which have been called the largest–and most destructive–industrial project in human history. The Chicago-based foundation also invests in mining companies, including those that mine coal in the western US and in South Africa; in Dynegy, a coal-burning utility; and in an energy-related hedge fund, the Cayman Islands-based ZP Offshore Energy Fund.

Humanity is in dark, uncharted territory…it is time to invest in bringing together leaders of the fossil fuel, energy, insurance, finance, credit ratings, and transportation industries with climate scientists, geoengineering specialists, and environmental advocates for no-holds-barred discussions about what strides and sacrifices must be made by 2030 to avert planetary catastrophe. All parties—including ourselves—must set aside “sacred cows” to come to terms with what is possible…

His blogpost was headlined It’s Time to Break with Convention.

This month, The Chronicle of Philanthropy published a package of cover stories, which I wrote, about foundations and impact investing. The cover story reports that very few of the US’s very biggest foundations have been willing to align their endowments with their grant-making.

In that regard, MacArthur is typical: The Hewlett, Packard, Bloomberg and Moore foundations, all of them major funders of environmental groups that work to curb climate change, also invest in the fossil fuel industry. Like most foundations, they remain unmoved by the GoFossil Free campaign launched by activist Bill McKibben, 350.org, the Sierra Club and Greenpeace in 2012 or by Divest-Invest: Philanthropy, a coalition of foundations that calls on other grant-makers to replace their investments in fossil fuels with investments in climate solutions.

Ellen Dorsey, a leader of Divest-Invest and the executive director of the Wallace Global Fund, is dismayed that major funders have declined to divest fossil fuels and reinvest in clean energy. By email, she told me:

Foundations should not be investing their endowments in industries driving the crises that they are asking their grantees to solve. Foundations are not just ‘any’ investor. They are driven by their mission. They receive charitable tax status to serve the public good. If their investments are harming the public good, they have mission level responsibility to act. If those same investments are financially poor, they are failing in their fiduciary duty, as well. If you are invested in fossil fuels, you own climate change.

Investing in fossil fuels is not only morally bankrupt, it’s financially bankrupt. The traditional energy sector has been one of the worst performers of the S&P500 for five years running, and in 2018 it was dead last. The shift is structural and one-way. Investors are on notice that the days when fossil fuels delivered strong, stable returns is over.

Dorsey is right that energy stocks have been terrible investments lately, badly lagging the broader markets. Whether that trend will continue is, of course, unknowable. So long us all of us continue to use fossil fuels, energy companies will profit by selling them.

When I asked Andrew Solomon, managing director for communications at MacArthur, for comment, he replied:

We maintain a small allocation in our investment portfolio to a variety of private energy managers using different strategies, including those that invest in oil, gas, and wind. We believe this allocation is a prudent part of an overall diversified investment portfolio. Diversification helps to ensure that our portfolio returns can adequately support our grantmaking across different potential economic and market environments. Specifically, our allocation to private energy can help protect our overall portfolio against the risk of higher inflation.

We always invest with care and consider carefully a manager’s approach to environmental safety, as well as other factors.

Our investment allocation to private energy is independent of our significant commitment – more than $236 million since 2015– to address climate change through our Climate Solutions strategy and through clean energy impact investments.

Again, it’s important to note that MacArthur is typical of US foundations. Most manage their endowments the old-fashioned way — that is, to make money any way they can, without much regard for the consequences. MacArthur is is one of the few to have carved out a slice of its endowment — albeit just $19 million — for impact investments that align with its missions.

But, of course, all investments have impact — for better or worse.

By investing in fossil fuels, MacArthur supports the industry that has done more than any other to oppose the climate solutions put forth by the environmental groups that it funds. Its grantees include the Sierra Club, the Environmental Defense Fund, the Nature Conservancy, the Natural Resources Defense Council and the Carbon Disclosure Project.

MacArthur also made the first major grant to The World Resources Institute, a respected, non-partisan, business-friendly, science-based think tank in Washington, D.C. MacArthur has given more than $52m to WRI over the years. And what does WRI say about what it calls sustainable investing?

Institutional investors, banks, and other private sector financial institutions oversee trillions of dollars of investable capital. How they choose to deploy these resources will have a large impact on which companies, technologies, and projects succeed and flourish. In a world where the dynamic challenges of climate change, population growth, resource scarcity, and inequality are testing the earth’s limits and our standards for human well-being, it is crucial that these financial actors allocate their capital in a way that accounts for environmental and social risks and supports sustainable solutions.

WRI has spent five years very prudently working to align its own $40m endowment with its vision for a sustainable future. To inspire others to follow, and provide practical guidance, WRI published an excellent report called Learning by Doing: Lessons from from WRI’s Sustainable Investing Journey. One can only hope that WRI sent copies to all its funders, including MacArthur.

To be sure, managing the $7bn MacArthur endowment is more complex than managing the $40m WRI endowment. In a 2017 blogpost, WRI notes that “there are still not enough high-quality investment products to meet demand to fulfill a fully diversified, global, multi asset-class portfolio—the type most institutional asset owners demand.”

But, whatever obstacles remain, it seems past time for the big climate funders like MacArthur to at least begin the process of aligning their endowment with their missions and values, and to explain why they are doing so. They need not go all the way to divestment, but must they invest in some of the dirtiest fossil fuel projects on the planet? The question answers itself.

As for the argument that sustainable investing will damage returns, the evidence increasingly points the other way. In a 2016 blogpost, WRI says: “When evaluated across multiple funds and time periods, sustainable investing exhibits a largely neutral – and oftentimes positive – impact on financial performance.” Some of the world’s most successful investors, including Warren Buffett and David Swensen, say that institutions, including foundations, are making a mistake when they try to beat the markets with actively-managed investments. (See my 2017 blogpost, Warren Buffett has some excellent advice for foundations that they probably won’t take.)

MacArthur’s financial performance, it turns out, is decidedly average. Foundation Financial Research, a startup company that compiled the first comprehensive database of foundation endowment returns, estimates that the MacArthur endowment generated annualized returns of 8.4 percent for the five-year period ending in December 2017. That places the foundation in the 40th-60th percentile of all foundations. MacArthur did slightly better than the average for all foundations during that period and slightly better than a peer group of larger foundations that pursued a similar investment approach, according to Foundation Financial Research. Different time periods would, of course, produce different results.

Lately, MacArthur has performed well. “Our 2017 returns, posted to our website, were 16.7 percent, which puts us in the 94th percentile for that year compared to a broad universe of foundations maintained by Cambridge Associates,” McArthur’s Andrew Solomon wrote.**

True enough, but the Wallace Global Fund did better. Ellen Dorsey tells me: “Our foundation had returns of 21.6% in 2017, 100% divested, over 16% in climate solutions, and with an additional carve out for mission investments where we accept lower than market returns. We did so well that we put our year end earnings right back in to grants for 2018–doubling our grant budget for action on climate and democracy.”

On its IRS returns, MacArthur reports that Susan Manske, the foundation’s chief investment officer, was paid total compensation, including performance bonuses, of $1.9m in 2017, $1.9m in 2016 and $1.6m in 2015–more than MacArthur’s president, Julia Stasch. Four managing directors in the investment office were paid between $900k and $1m, including performance bonuses. The compensation figures includes unvested incentive compensation, which may not be paid because it is subject to a substantial risk of forfeiture based on future returns, according to MacArthur.

To sum up: MacArthur pays its asset managers generously for generating average returns while investing in ways that make a planetary catastrophe more likely.

Note to self, MacArthur: It’s time to break with convention.

*Here is my incomplete list of private equity funds owned by MacArthur, with descriptions drawn from their websites:

While much remains hidden — hedge funds based in the Cayman Islands make limited disclosure, to say the least — MacArthur is more transparent than most foundations about its portfolio. Try to figure out what Bloomberg owns–you can’t.

**The Cambridge benchmark is neither broad-based nor transparent. Foundation trustees who rely on benchmarks provided by the executives who are being benchmarked aren’t doing their job.

Marc Gunther is a veteran journalist, speaker, and writer who reported on business and sustainability for many years. Since 2015, he has been writing about foundations, nonprofits and global development on his blog, Nonprofit Chronicles.