AltEnergyStocks.com has endorsed a candidate in all the US Presidential races since 2008 (Obama, followed by Obama in 2012, Clinton in 2016, and a generic endorsement of congressional Democrats in 2018.

Despite the long string of Democratic endorsements, AltEnergyStocks this site does not automatically endorse Democratic or liberal candidates.  We are issue driven, and all our endorsements to date have been purely based on the policy positions of the candidates.

How We Make Our Decisions

On the Democratic side, the platform has shifted from generally good policies but not nearly enough of a priority under Obama, to now, when nearly all the Democratic nominees having serious plans to address climate change.  If it were a choice between nearly any of the candidates for the 2020 Democratic nomination and the platforms of President Obama or Secretary Clinton in the past three presidential elections, AltEnergyStocks would have selected one of the current candidates.  Andrew Yang is the only candidate mentioned in this article whose climate plan we cannot endorse (although we love his advocacy of Universal Basic Income.)

The wealth of strong climate plans arose at least in part thanks to the short lived candidacy of Jay Inslee.  Governor Inslee not only brought the climate issue to the fore, but left behind his detailed and practical blueprint for tackling climate change. When he left the race, he made sure to note that his plan was open source, and urged the other candidates to draw from it.  Many did, even to the point of consulting directly with Governor Inslee or his staff when crafting their climate plans.

The current bounty of choice and detail in Democratic environmental platforms could easily lead an environmentally oriented political analyst down the rabbit hole of analysis paralysis.  AltEnergyStocks is not a website for political analysis, however, we do stock market analysis.  That means we are accustomed to handling an endless stream of seemingly relevant information and focusing on only that information which will make a real world difference in a company’s financial performance.

Back in the realm of politics, the important questions about the Democratic nominee’s environmental performance are:

Who Can Beat Trump?

There are three broad arguments about what type of candidate has the best chance of beating Trump in
2020.

First, there are those who believe that after three and a half years of Trump’s continual affronts to our nation’s constitution, the law, and basic human decency, swing voters will swing back to any Democrat now that they are familiar with the alternative.  The example of 2016 shows the folly of this sort of complacency.  Throughout the 2016 presidential campaign, not to mention his entire public life before that, Trump repeatedly showed himself to be liar, a generally abhorrent human being, and a bad businessman.  Yet he still won the Presidency (if not the popular vote) over a highly competent if not particularly inspiring Democratic candidate, Hillary Clinton.

This time around, Trump is clearly using every power of the Presidency and his influence in foreign affairs to rig the election in his favor.  In the face of this, Democrats need an inspiring candidate who can beat Donald Trump in enough of a landslide so that Trump and Trump’s allies attempts to sway public opinion and rig the election will insufficient to effect the final outcome.

The second broad argument focuses on traditional working class swing voters in the Midwestern states that tipped the election to Trump in 2016.  Supporters of Joe Biden and other relatively moderate Democratic candidates like Pete Buttigieg and Amy Klobuchar believe they will be more effective in these states than the more progressive candidates.

As with the first argument, we find this argument unconvincing.  Relatively moderate candidates are less likely to inspire the Democratic base and may depress voter turnout.  A low turnout election will be more vulnerable to manipulation.

The third broad argument is that  an inspirational candidate is best equipped to beat Donald Trump is.  Such a candidate can motivate the large numbers of infrequent voters in the Democratic base to turn out and vote.  A high turnout election is also likely to be key to flipping control of the Senate into Democratic hands.  Without Democratic control of the Senate, it will be difficult for the new President to fix the damage to our institutions and the environment done by the four years of the Trump administration, let alone making forward progress.

What Will a New Democratic President Be Able to Deliver?

Helmuth von Moltke the Elder is popularly quoted as saying that no battle plan survives contact with the enemy.  Likewise, no political platform will survive contact with the realities of the presidency and the need to work with Congress (even if both the House and Senate are controlled by the Democrats.)

In order to deliver on an environmental agenda, our candidate will need to have experience working with Congress, a strong electoral mandate, and (we hope) a Democratic controlled House and Senate.  A strong mandate and Democratic control in the Senate both point to the need for high turnout and very energized Democratic voters.  In terms of experience, former and current National office holders like  Joe Biden, Elizabeth Warren, Bernie Sanders, Kamala Harris, and Cory Booker are likely to have an advantage in delivering on their promises than relatively inexperienced hands like Pete Buttigieg, Tom Steyer, and Andrew Yang.

Also in terms of getting things done, not being beholden to special interests by relying only on small donors like Bernie Sanders and Elizabeth Warren will be an advantage, but this might also be a disadvantage in terms of elect-ability if they cannot match the funds raised by Trump from his fossil fuel and corporate donors.  Not being beholden to big donors may help a candidate by exciting the Democratic base and even voters who voted for Trump in 2016 in a protest against politics-as-usual.  Since refusing corporate donations has both pros and cons, this is not a factor we used to decide which candidate to endorse.

Putting it All Together

In sum, AltEnergyStocks is choosing to endorse a candidate that who will excite the Democratic base rather than a moderate candidate.  We also want one with previous experience in the Federal Government.  Based on the polls and personal conversations with voters, the candidates who are able to excite supporters are Buttigreg, Harris, Sanders, and Warren.  Andrew Yang is notable for a small but extremely devoted following, but does not seem to be able to expand his appeal to the broader swath of Democratic voters.  While still the front runner, Joe Biden seems to hold that place mainly because people think he can beat Trump, not because they are excited about him.

Those candidates which both have some level of excitement behind them and experience in Washington are Kamala Harris, Bernie Sanders, and Elizabeth Warren.  All three combine experience in Washington with a willingness to take a principled stand against corruption.  Despite being political insiders, they can all can claim to be ready and able to confront Washington’s vested interests.  Harris does not yet seem to have the broad support of Warren and Sanders, but has enough that she could still gain momentum.  As a black woman, her candidacy would be more likely to inspire high turnout among black voters who will be crucial for a high turnout election. 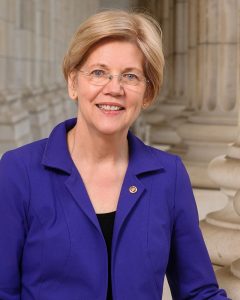 Looking beyond the environment, elect-ability, and likely effectiveness in Washington, Elizabeth Warren has an appeal to AltEnergyStocks that neither Harris nor Sanders can match.

The purpose of this website is to help educate the investing public about clean and alternative energy stocks with the goal of increasing investment in those stocks and helping the companies we are writing about and investing in solve the climate crisis.  Underlying this goal is the belief that the stock market and capitalism in general, though flawed, can be a powerful tool for solving the world’s problems.  We believe that capital markets need reform, but with proper regulation, capital markets can be a powerful force for good.

We hope you will join us in donating to the Warren campaign.  If we are going to reform capitalism and turn financial markets back into a force for good and the environment, the support will come from small investors like us who support market reform, not from the people currently profiting from the many flaws in the system.

If you have been following our stock picks, you should have some decent capital gains to share.  You should also know that right now is a particularly risky time to keep your money invested in the stock market.  So invest Elizabeth Warren’s campaign and better capital markets instead!