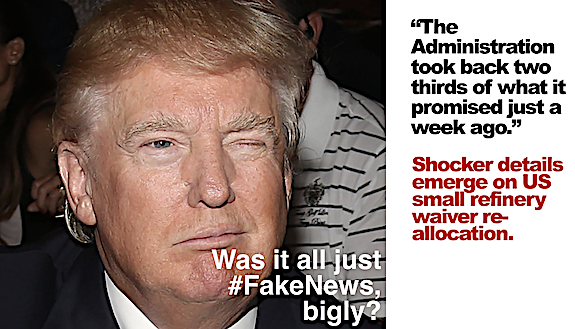 “EPA Reneges on Trump’s Biofuels Deal”, said the Iowa Renewable Fuels Association in reacting to the US Environmental Protection Agency’s new plans for fulfilling federal renewable fuel requirements. EPA released a proposed supplemental rule for the Renewable Fuel Standard today, and the bioeconomy is up in arms, and the outrage is centered in farm country, once a Trump bastion of support.

“IRFA members continue to stand by President Trump’s strong biofuels deal announced on Oct. 4, which was worked out with our elected champions and provided the necessary certainty that 15 billion gallons would mean 15 billion gallons, even after accounting for SREs. Unfortunately, only 11 days after President Trump’s landmark announcement, the EPA proposal reneges on the core principal of the deal.

“Instead of standing by President Trump’s transparent and accountable deal, EPA is proposing to use heretofore secret DOE recommendations that EPA doesn’t have to follow. That means there is no guarantee that RFS exemptions will be accounted for in the RFS.”

Is the EPA’s action an outright about face from the Trump deal announced recently?

As we mentioned at the time of the deal, the operative meme for the Trump Administration’s rural policy is, “sort of”. The deal a couple of weeks ago sorted out the bioeconomy’s problems with small refinery waivers, sort of. The EPA’s actions run counter to the announced Grand Bargain, sort of.

As IRFA explains, “the proposal today essentially asks Iowa farmers and biofuels producers to trust that EPA will do the right thing on SREs in 2021 when they have spent the last two years weaponizing SREs to unfairly undermine the RFS. It is unreasonable and counterproductive to expect Iowans to put their faith in EPA to fix the SRE problem when they were the ones who created the crisis in the first place.

“As this proposal goes against the core of President Trump’s deal that we continue to support, we will work with our elected champions and the President to get the deal he proposed, and we all celebrated, back on track. There must be certainty that 15 billion gallons will mean 15 billion gallons to restore integrity to the RFS.”

Why all the heated reaction to that proviso?

Bottom line, EPA has ignored DOE recommendations in the past, as we reported here, and is under no legal obligation to follow them. Which undermines the “15 billion means 15 billion” thesis of the October 4th deal.

How did EPA put it?

The agency said in an official statement: “Today’s notice does not change the proposed volumes for 2020 and 2021. Instead, it proposes and seeks comment on adjustments to the way that annual renewable fuel percentages are calculated. Annual renewable fuel percentage standards are used to calculate the number of gallons each obligated party is required to blend into their fuel or to otherwise obtain renewable identification numbers (RINs) to demonstrate compliance.

Specifically, the agency is seeking comment on projecting the volume of gasoline and diesel that will be exempt in 2020 due to small refinery exemptions based on a three-year average of the relief recommended by the Department of Energy (DOE), including where DOE had recommended partial exemptions. The agency intends to grant partial exemptions in appropriate circumstances when adjudicating 2020 exemption petitions. The agency proposes to use this value to adjust the way we calculate renewable fuel percentages.”

Biodiesel “skeptical” over “never-before-discussed” proviso that “lack transparency” and “can’t be trusted”.

In biodiesel country, the National Biodiesel Board said it is skeptical the Environmental Protection Agency’s proposed supplemental rule will ensure that 2020 and future biomass-based diesel volume obligations are fully met. The supplemental notice contains a never-before-discussed proposal to estimate small refinery exemptions for 2020, with no assurance that the estimate will come close to actual future exemptions. The biodiesel industry does not believe the proposal meets President Donald Trump’s October 4 promise to American farmers and biodiesel producers.

Kurt Kovarik, NBB Vice President of Federal Affairs, added, “The notice that EPA issued today is significantly different from the agreement that biofuel industry champions negotiated with President Trump just two weeks ago, which was to estimate future exempted RFS volumes based on the average of actual volumes exempted over the past three years. EPA is proposing a brand-new method for making the estimate – one that was never previously proposed or discussed and significantly undercounts past exemptions. Once again, EPA is sending a signal to the biofuel industry that the volumes it sets in annual rules can’t be trusted.”

Advanced biofuels: “the Administration took back two thirds of what it promised just a week ago”

Over at the Advanced Biofuels Association, there were fighting words.

“Today, the Administration took back two thirds of what it promised just a week ago, and the irony is rich,” said ABFA president Mike McAdams. “In this rule, EPA has based SRE reallocation on DOE recommendations when the Agency ignored those recommendations in its August 9 decision to grant 31 exemptions for compliance year 2018. Furthermore, EPA has proposed to reallocate only 580-770 million gallons when 1.4 billion were ultimately displaced by those SREs. We doubt the legality of this action, and the Administration’s good faith in proposing this ‘deal.’

“ABFA will argue its case later this month before the D.C. Appellate Court challenging the SREs granted over the last several compliance years. We look forward to the Court’s judgment on the Administration’s efforts to undercut the congressional intent of the RFS program.”

Growth Energy CEO Emily Skor blasted the EPA proposal in no uncertain terms. “It is unconscionable that EPA’s proposal betrays President Trump’s promise to rural America” she said. “A week ago, Administrator Wheeler personally took to the airwaves and promised Iowa farmers that he would accurately account for lost gallons moving forward based on the ‘last three years of the waivers.’ Administration officials repeatedly said that 15 billion gallons will mean 15 billion gallons and this proposal fails to ensure that farm families and biofuel producers have the certainty they need to reinvest and rebuild after three years of massive demand destruction at the hands of EPA.

From Iowa: “Apprehension” over “dramatic departure” proposal that “appears to run contrary to a previously agreed-upon deal with President Trump”

In Iowa, the Iowa Biodiesel Board expressed apprehension over the Trump Administration’s new plans for fulfilling federal renewable fuel requirements, saying it appears to run contrary to a previously agreed-upon deal with President Trump. The group will join other renewable fuel and farm advocates in examining the Environmental Protection Agency’s proposed supplemental rule for the Renewable Fuel Standard, released today.

“We are deeply concerned by EPA’s new proposal to address renewable fuel gallons lost through refinery exemptions to the RFS, said Iowa Biodiesel Board executive director Grant Kimberley. “The solution President Trump previously promised us would have estimated future exempted RFS volumes based on the average of actual volumes exempted over the past three years. That is the remedy we need to steady the renewable fuels market, help plants re-open their doors, and infuse rural economies still in crisis.

“This new plan from EPA appears to be a dramatic departure from the agreement struck with the President, and we expect markets to react accordingly. This is likely to inflict further damage on the already struggling biodiesel industry and farm economy. We will join our Iowa political champions, the National Biodiesel Board and other groups in scrutinizing this new proposal, and in ensuring the final rule fulfills the deal President Trump agreed to earlier this very month.”

One of the classic Trumpisms is “you’ll find out”.

11 days ago, we cautioned industry against excessive celebration over the October 4th biofuels deal while we awaited the hard details. Then, we wrote,”This is a plan with an awful lot of ‘EPA will take comments‘ in it, so there are good reasons to wait and see how this deal plays out.”

So, now, we found out. On the other hand, did we? This Administration likes a cliffhanger more than any before it, and we’ll have to wait for next week’s episode to find out what comes of all the frothing and frustration roiling the industry now.

The stakes are Yuge. Tremendous. This story has zero finished.