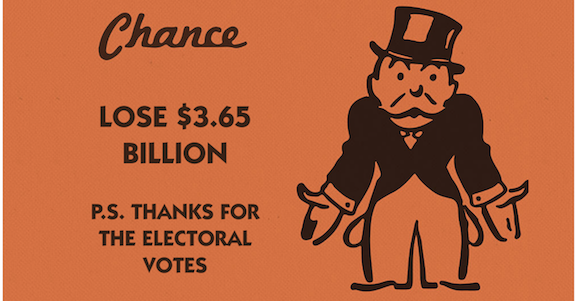 In Washington, new evidence has appeared that a Trump Administration shift on US low carbon fuel policy may have cost US corn growers an estimated $3.65 billion.

The mechanism? A secretive effort by Administration officials installed at the US Environmental Protection Agency that destroyed an estimated 1.37 billion gallons of annual demand for low-carbon renewable fuels, in favor of fossil fuels.

The losers? Corn growers, it appears. In 2013 the Center for Agricultural and Rural Development at Iowa State University published a study which looked at the impact on corn prices from a 1.4 billion gallon decrease in ethanol demand. The Center found that the impact was 25 cents per bushel. Applying that figure to the 14.6 billion bushel 2017 corn crop leads to the lost profits figure of $3.65 billion.

Here’s what we know.

The US Environmental Protection Agency granted 19 economic hardship waivers, out of 20 applied for during 2017 and applying retroactively to the 2016 compliance year.  EPA granted 29 waivers out of 33 applied for in 2017, and has not made a determination on the fate of the other four applicants. More on the data here.

By comparison, in the 2013-2015 period, the average number of hardship waivers granted each year was three, according to analyst Geoff Cooper, incoming CEO of the Renewable Fuels Association.

The retroactive nature of the exemption is important to this story. The normal procedure is to re-assign any fuel volumes impacted by hardship waivers to the larger refineries.

Last month, a coalition — consisting of the Renewable Fuels Association, American Coalition for Ethanol, Biotechnology Innovation Organization, Growth Energy, National Biodiesel Board, National Corn Growers Association, and National Farmers Union — said that it appears that EPA is setting the obligations for the larger refineries before granting retroactive waivers to small refineries, so that larger refineries are not picking up the slack.

The coalition petitioned EPA in June to change its methodology for calculating renewable fuel volumes owing to the “flood” of retroactive hardship waivers, writing:

Each year since the 2010 Final Rule, EPA has calculated the value of the annual standards according to the Annual Standard Equations … [and] accounted for the small refinery hardship exemptions granted before the final RVOs each year by assigning…” a proportionally higher percentage standard for remaining obligated parties. The Annual Standard Equations do not, however, account for small refinery exemptions granted retroactively after EPA has finalized a given year’s RVOs…The volumes of required renewable fuel attributable to retroactive exemptions—which, as just discussed, appear to be the vast majority of the recent wave of hardship exemptions—are simply lost.”

Hardships granted rising from 24% of petitions to 100%

The coalition estimated that 9 out of 38 petitions for hardship waivers received for the 2013-2015 compliance period were granted, or 24% of petitions.

In 2017 with the inauguration of the Trump Administration, petitions began arriving at EPA relating to appeals for retroactive waivers for the 2016 compliance period. Reuters reported in April that “the Trump Administration has encouraged small refiners to apply for the hardship waivers. A surge of applications has come to the EPA.”

The coalition noted the spike in hardship waivers but did not see a spike in actual hardship. The coalition contended, “RIN prices are at multi-year lows, oil prices are increasing, and refineries are enjoying solid margins and corporate tax cuts.”

Let’s look at that.

The 2016-17 Refinery margin and profitability environment

During 2016 and 2017, the US oil refining industry enjoyed above-average crack spreads — the spread between crude oil and refinery product prices and a primary indicator of refining profitability.

The US Energy Information Administration in its latest monthly report on refining prices offered this indicative chart on refining margins and profitability. 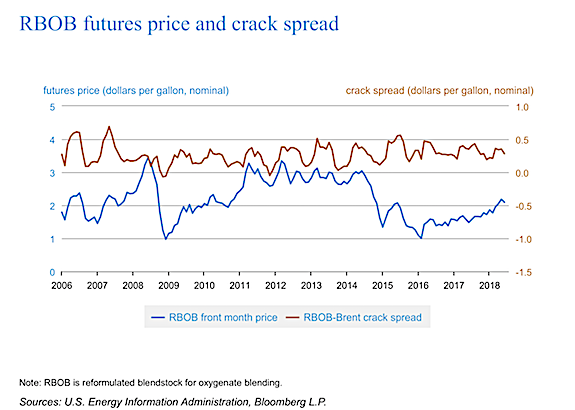 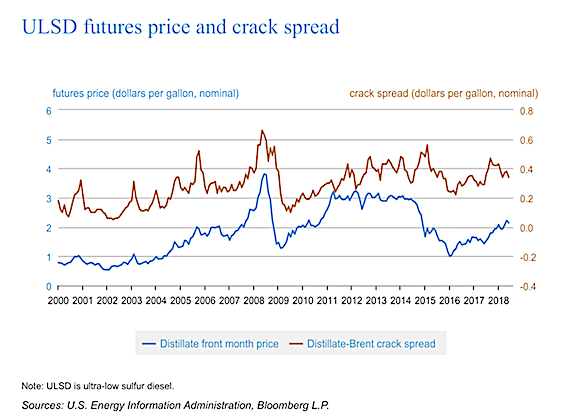 Refinery shutdowns in the era of low-carbon fuels

According to the US Energy Information Administration, 22 US oil refineries permanently shut down since the initial establishment of the US Renewable Fuel Standard in 2005 — an average of 1.57 per year. The US EIA reported 23 shutdowns in all, but the Paramount refinery in Southern California shut down petroleum refining in order to convert fully to renewable fuel production.

How does this shutdown rate compare to the past? During the 15 years prior to the passage of the Renewable Fuel Standard, the Energy Information Administration reported that 57 refineries permanently shut down, a rate of 3.8 per year.

A complete table of refinery shutdowns can be downloaded here.

The low-carbon demand destruction, in detail

“The volume of gasoline and diesel exempted from RFS blending obligations jumped dramatically in the 2016 and 2017 compliance years, compared to previous years. The data strongly support the argument that EPA has recently changed its criteria for granting small refiner exemptions.  These estimates are corroborated by additional EPA data showing the projected renewable fuel volume obligation at the time the final RVO rule was published compared to the volume obligation reported by obligated parties after any exemptions and gasoline/diesel consumption changes are taken into account.”

“While EPA has refused to provide the public with information regarding the number and magnitude of its small refiner exemptions, monthly compliance data published by the Agency sheds bright light on the impact of the exemptions. Indeed, the data appear to confirm previous concerns and suspicions raised by stakeholders about the size, scale, and seriousness of the secret small refiner exemptions.” 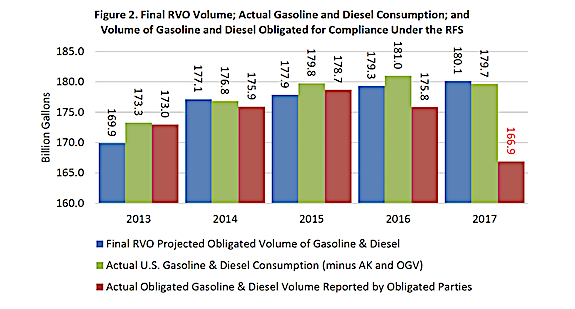 In 2017, EPA granted HollyFrontier two retroactive small refinery hardship exemptions for calendar year 2016 that saved the company about $58 million in RIN compliance costs….During that same 2015 to 2016 period, the company was in the midst of a $1 billion stock repurchase plan that had been approved in 2015. At the end of 2016, the company had spent over $800 million for share repurchases. Id. Thus, EPA appears to have determined that HollyFrontier could afford to pay its shareholders almost one billion dollars but could not scrounge together $58 million for compliance with its RFS obligations.

CVR Energy (CVI), which reportedly received an exemption for its two refineries for 2017, appears to have been profitable that year. According to its investor disclosures, the margin per barrel of crude oil throughput at CVR Refining, LP’s Wynnewood Refinery increased to $9.85 in 2017 from $8.07 in 2016. See CVR Refining, LP, 4th Quarter 2017 Earnings Report (Feb. 22, 2018) at 16, attached hereto as Appendix S. Due to its retroactive exemption, CVR expects its 2018 cost of compliance with the RFS to be $120 million less than the amount it had estimated just two months prior.

In a letter to Senator Grassley, EPA Assistant Administration William Wehrum wrote:  The [Clean Air Act] directs EPA, in consultation with the Department of Energy, to consider the DOE Small Refinery Study and “other economic factors” in evaluating small refinery petitions.

“Other factors” include whether the refinery had other business lines besides refining and marketing, renewable fuel blending activity, special hardship events impacting refinery operations, and the extent to which compliance impacts the economic viability of the refinery. The DOE has extensive documentation on the standards for a finding of disproportionate economic hardship, here and here.

For now, it’s important to note that refining margins are not the sole criteria in determining hardship. Also, it should be noted that refiner profitability varies regionally in the United States.

However, as the coalition noted in its EPA petition:

“Congress had mandated that all small refineries were exempted until 2011, 75 Fed. Reg. 14,716, and after that, EPA did not anticipate granting additional small refinery hardship exemptions prospectively except in rare circumstances. Although EPA later extended the small refinery exemptions for 2011 and 2012 to 13 of 59 small refineries based on a 2011 DOE study, those extensions should, per the CAA, have been determined before the RVOs for 2011 and 2012 were finalized and thus there would have been no reason to expect those exemptions to be retroactive. And for a long time thereafter, EPA granted exemptions on a case-by-case basis sparingly.”