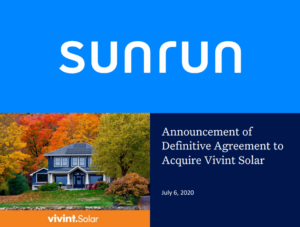 In July, Unprofitable residential solar lease company Sunrun (RUN) announced that it would acquire its unprofitable competitor, Vivint Solar (VSLR). Each share of Vivint stock will be exchanged for .55 shares of Sunrun’s common stock. Sunrun indicated that there were great synergies between the two companies.

The residential solar lease and residential PPA offers little synergy for customers, other than giving away their ITC and paying much more over time for having a solar system on their roof than they would if they bought it in the first place. Companies operating in the space need the cheapest cost of hardware (not always the best), fastest installs (not always the best), to reuse equipment when customers withdraw (including inverters), and to keep on adding customers to feed the machine.