The solar industry has a supply chain problem – no, not just the current polysilicon and glass constraints. Solar wafer, ingot, cell, and module manufacturing are concentrated in China and South East Asia, leaving buyers outside these areas vulnerable to supply chain shocks.

Countries in this region have lower labor costs, lower energy costs, and higher incentives and subsidies for manufacturers. In China, manufacturing is supported (and controlled) by the central government.

Manufacturers in China, who have expanded into South East Asia, can make do with lower
margins than their counterparts in other countries. Manufacturers in South East Asia and China can also undercut competitors’ prices, determine industry direction (P-PERC, mono-crystalline, and n-type), ignore pilot-scale timelines, and ramp to commercialization more rapidly than can competitors in other countries.

Manufacturers in China can also raise prices and increase margins with little pushback from
buyers in other countries because … they control the supply chain.

It did not take long for China’s manufacturers to dominate shipments. Figure 1 depicts shipment growth for manufacturers in China, South East Asia, and the rest of the world from 2005 through 2010. During this period, shipments for China grew at a compound annual rate of 157%.

The Polysilicon and Glass Problems

The shortage of glass for solar modules continues as a bottleneck for the industry even as
glass manufacturers in China ramp capacity. China has 90% of the capacity to produce glass for solar panels, which was strained in part by demand for bifacial modules and in part by government restrictions on adding capacity. As with the global polysilicon shortage in the early 2000s, the glass industry was unprepared for the surge in demand despite the clear trend over several years to glass-glass modules. With glass prices up and capacities tight until Q3 2021, module manufacturers face price increases and are passing these increases on to customers.

Meanwhile, after years of pricing below cost, polysilicon prices are increasing dramatically and are unlikely to decrease until potentially 2022. As with price increases for solar glass, module manufacturers are passing the increases on to buyers. Figure 3 offers polysilicon prices from 2018 through the 2024 estimate. 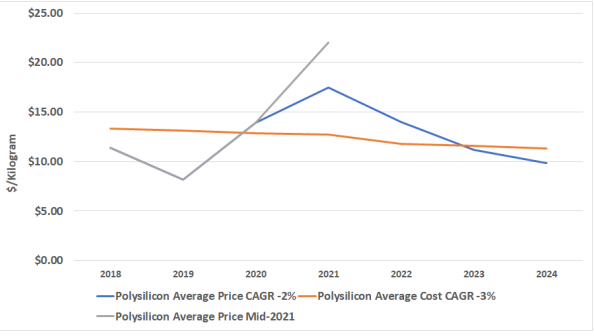 China has over 82% of the global capacity to produce polysilicon. In 2020 shutdowns due to the pandemic and accidents at polysilicon production facilities in China left the industry under capacity. In Q3 2020, floods forced Tongwei to shutter a 20,000 MT facility in Southeastern China. In September, a 50,000 MT polysilicon plant in Xinjiang suffered a major ‘incident’ during maintenance and was forced to shut down.

With the capacity to produce polysilicon and other raw materials, glass, wafers, ingots, cells, and modules concentrated in China and its expansions in South East Asia, buyers in other countries have little control over the pricing and availability of product.

While module prices were low, buyers of solar cells and modules could let themselves believe it was a buyer’s market where they controlled the price – after all, if the current offer is not low enough, a cheaper module is right around the corner.

Years of low prices had a lulling effect, hiding the fact that true control of the market would
become clear at some point. It’s a seller’s market and has been for years.