Oh, what a tangled web you weave when vying for an exclusion from tariffs via strategic ac-quisition. In April, SunPower (SPWR) announced it had acquired (subject to regulatory approval) So-larWorld US, subsidiary of the company that kicked off the solar tariff dispute with a petition in 2012, focused on China as the dumper of cells and modules. SolarWorld GmbH, based in Germany, could not file the petition. It needed its US subsidiary to do so. As SolarWorld US is, currently, the only crystalline cell manufacturer in the US, it takes on a value beyond the sum of its outdated parts.
In 2014, SolarWorld followed up its initial trade petition with the addition of Taiwan as a dumper of cells. In mid-May 2017, SolarWorld strategically declared bankruptcy thus likely avoiding payment of a ~$770-million award to Hemlock. In mid-May 2017, SolarWorld via its US subsidiary, strategically joined Suniva’ s 201 trade petition against, basically, every other country in the world including, it turned out, its German-based parent.
So … perhaps the phrase should be reworded to read: Oh, what a tangled web you weave when strategically filing bankruptcy to avoid a debt, strategically joining a trade dispute to buy time, and, concerning SunPower, strategically acquiring a company to potentially gain an exclusion.
In March 2018 SolarWorld, likely not strategically, again declared insolvency, an ironic victim of the 201 tariff petition it had strategically joined for reasons that likely now no longer matter to it.
As the only (currently) cell manufacturer in the US, SolarWorld Industries (Germany) should have a strong negotiating position for its US subsidiary. However, as the strategically located subsidiary in question has an insolvent and potentially desperate parent, this position is reduced.
With SolarWorld in a compromised negotiating position, this may have been the point at which SunPower saw an economic advantage (among others) to acquiring SolarWorld US.

Back to SunPower, the acquisition, if approved, might solve some of SunPower’s problems with the current tariffs as SunPower would become the only US crystalline cell manufacturer, at least temporarily. As the only US crystalline cell manufacturer, it becomes the decider con-cerning the sunset, extension or expansion of the 2012 and 2014 tariffs and more likely to gain an exclusion in the current tariff situation.
An exclusion in the current 201 tariffs would allow SunPower to avoid millions in tariffs over the next few years and this might ameliorate the expense of its SolarWorld US acquisition as well as the necessary upgrades and capacity additions the facility needs.
As acquisitions of companies are not (typically) impulse buys, in hindsight, SunPower’s earlier suggestion that it would be willing to establish pilot scale manufacturing may have been a hint as to its future direction.
Then again, the earlier announcement concerning establishing pilot scale manufacturing may have been stand-alone attempt to avoid expensive, punitive and haphazardly applied tariffs and the acquisition a Hail Mary Pass with benefits with or without a 201 exclusion.

Pro: Following the acquisition, SunPower, at least for the time being, becomes the only c-Si manufacturer in the US and as the only c-Si manufacturer in the US, SunPower becomes the decider concerning tariffs
Pro: If the SolarWorld US acquisition earns SunPower an exclusion, it will save millions of dollars in tariffs on its imports
Pro: Despite the current US administration’s antipathy to all things renewable, the US market for solar deployment is gathering support from utilities and may prove long-term stable as may the markets in Latin America
Con: SolarWorld’s monocrystalline and SunPower’s monocrystalline directions are not com-pletely aligned
Con: SolarWorld has not focused on 72+ cell modules and SunPower will need to invest in needed upgrades
Con: After the acquisition SunPower would be the sole crystalline cell manufacturer in the US, a temporary situation at best and this does not even consider First Solar’s announced intention to add 1.2-GWp of CdTe capacity, or the plans of Jinko Solar (c-Si) and others
Con: All markets are vulnerable, a slowdown in US and/or Latin America solar deployment would make the SolarWorld acquisition look like a very bad buy
Con: Price competition from imports is not going away and SunPower might find itself a plaintiff in a future tariff dispute of its own instigation and thus wearing the mantle of industry villain

SunPower Announces its Acquisition of SolarWorld US

…or, the art of the last-ditch deal

In April, following an attempt to encourage an exclusion by offering to establish pilot scale production in the US, then pulling back on this announcement and warning of significant layoffs without an exclusion, SunPower announced that it would acquire the Oregon production facility of SolarWorld US. The deal is subject to US and German regulatory approval.
Other less attractive strategic options SunPower might have considered include a switch in market focus away from the US, and an adjustment in price strategy, requiring margin shrinkage in order to keep panels affordable.
Concerning a strategic market focus switch, SunPower is addressing access to China’s domestic market with its JV partners Dongfen Electric and Tianjin Zhonghuan Semiconductor. Other markets are penetrable but are highly price competitive in a way that does not favor SunPower’s cost structure.
Adjusting price point to address US tariffs would be unpleasant for SunPower. Absorbing margin would have an unpleasant impact on it economically and it is unlikely customers would accept a price increase forcing absorption of the tariff onto SunPower.
In earlier tariff decisions the US Department of Commerce ruled that in the normal case the PV cell (in this case, crystalline) is the crucial component. Thus, in one swoop of an acquisition, if approved, SunPower becomes the sole manufacturer of crystalline cells and thus a plaintiff instead of a defendant. Following the acquisition, SunPower could, presumably, allow the 2012/2014 tariffs against Taiwan and China to sunset, focus on another target country for tariffs (for example, a direct competitor from whom it does not buy cells) or allow for a return to free trade. SunPower would also be in a better position to achieve an exclusion on the 201 tariffs.
SunPower has indicated that if the deal is approved it will continue to ship SolarWorld’s current products while updating and expanding the facility for production of its p-type monocrystalline product. Concerning the last, SunPower uses merchant cells, including cells from China, for its p-type monocrystalline modules and so will be adding module assembly (not cell capacity) at the Hillsboro, Oregon facility though, the potential of a future cell line is always possible.
As to continuing to support SolarWorld’s current products, certainly in the near term. As long as SunPower supports cell production at the Oregon facility it maintains a certain controlling po-sition in terms of tariffs.
Observers should keep in mind that in the long term, historically, acquired legacy products are often quietly phased out over a period of time. It’s easy to do. Here is a tried and true way to get rid of unwanted legacy products: run out and shift customers over to new products.

SolarWorld, A tale of many acquisitions

The SolarWorld of today is an amalgamation of several companies, with a long PV industry pedigree. Its history is the PV industry’s history. Below is a truncated history of the complicated history of SolarWorld. As with all solar roads, the history of SolarWorld, et al, is a bumpy one.
• 1976: Solar Technology International is founded by PV Industry Pioneer, Bill Yerkes
• 1977: Atlantic Richfield Company buys STI and renames it ARCO Solar
• 1988 SolarWorld is founded by Frank Asbeck
• 1990: Siemens AG (SI) enters an agreement to purchase ARCO solar for $35.9-million and renames the company Siemens Solar Industries (SSI)
• 1993: Siemens Solar Industries files a lawsuit against ARCO Solar claiming that ARCO intentionally defrauded it by overstating the commercial viability of its products
• 2000: SolarWorld acquires an 82% share of silicon wafer manufacturer, Bayer Solar GmbH
• 2001: A joint venture between Shell Renewables Ltd. Siemens Solar GMBH, and E. On Energy GmbH establishes Siemens Shell Solar GmbH
• 2002: Shell acquires all shares of Siemens Shell Solar GmbH
• 2002: SolarWorld founds Deutche Cell GmbH with an initial 30-MWp cell production line
• 2005: SolarWorld establishes its US facility, SolarWorld California Inc., in Camarillo, California
• 2006: SolarWorld acquires Shell Solar’s crystalline operations including its 50-MWp wafer/ingot facility in the US, its 48-MWp cell facility in the US and its 55-MWp module assembly facility in the US (among other facilities in other countries)
• 2007: SolarWorld announces it will establish a new 500-MWp facility in Hillsboro, Ore-gon
• 2008: SolarWorld commences operations in Oregon
• 2011: SolarWorld announces it will shift production to Oregon and close its manufacturing in California
• 2013: SolarWorld acquires the Germany-based PV manufacturing facilities of Bosch
• 2018: SunPower announces it intends to acquire the manufacturing operations of SolarWorld US

SunPower, the high efficiency pioneer of the PV industry
Humans share a common ancestry and all PV companies share technology DNA. Founded in 1985, SunPower produced its first cell in 1993. It initially focused on CPV but switched to flat plate applications following its acquisition by Cypress Semiconductor. A brief and incomplete timeline for SunPower is:
• 1985: Dick Swanson founds SunPower
• 1993: SunPower produces its first one-sun cell
• 1997: Honda Motor Company of Japan acquires a minority stake in SunPower
• 2002: Cypress Semiconductor Corp. invests $8.8-million in SunPower for a 44% stake
• 2004: SunPower establishes a 25-MWp manufacturing facility in the Philippines
• 2005: Raises $145.6-million in its IPO
• 2006: Invests $5-million in a joint venture with Woongin Coway to manufacture mono-crystalline wafers in South Korea
• 2006: Signs a silicon ingot deal with REC SiTech AS, a wholly owned subsidiary of REC in Norway
• 2007: Acquires Berkeley-based System integrator and commercial market pioneer, PowerLight
• AUO and SunPower establish a joint venture in Malaysia to manufacture IBC solar cells
• 2011: French petroleum company Total acquires 66% of SunPower paying ~$1.37-billion, and SunPower acquires Total solar subsidiary Tenesol for $165-million
• 2016: To resolve a dispute, SunPower agrees to pay $170-million over four years in a stock purchase agreement to exit its JV with AUO
• 2018: SunPower announces it has agreed to acquire SolarWorld USA

SunPower, the high efficiency pioneer of the PV industry 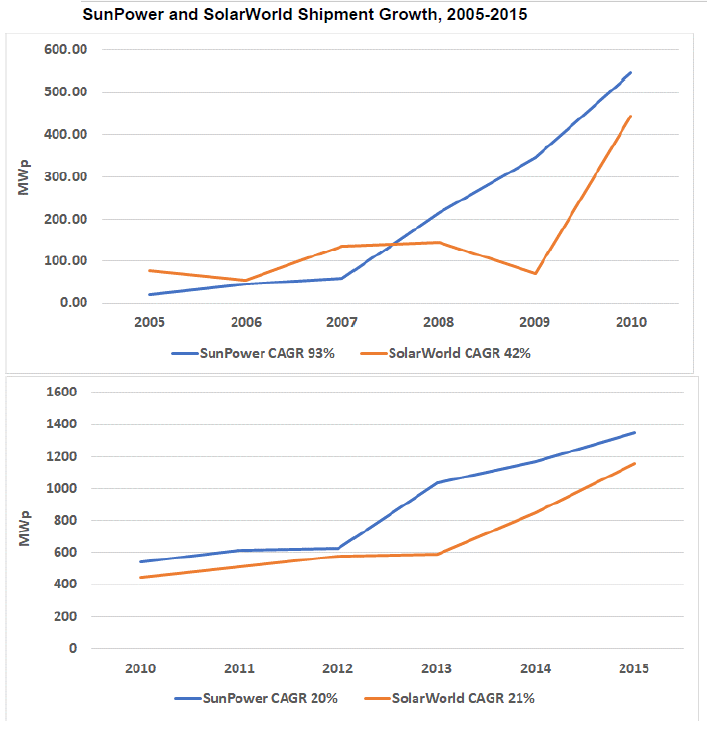 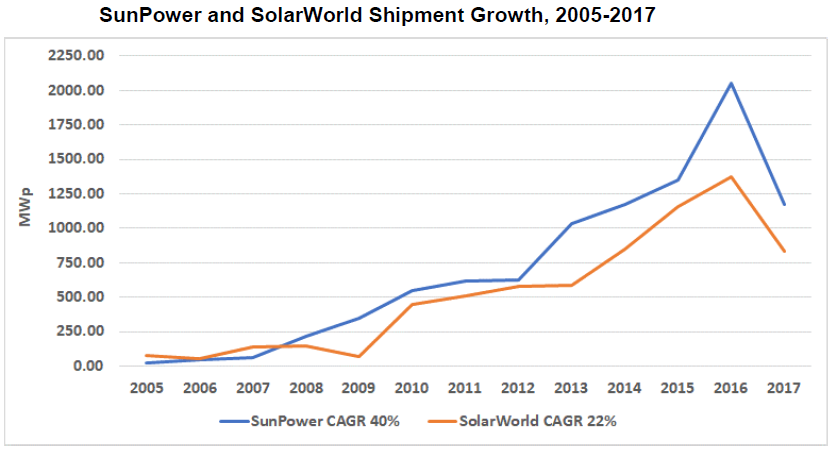 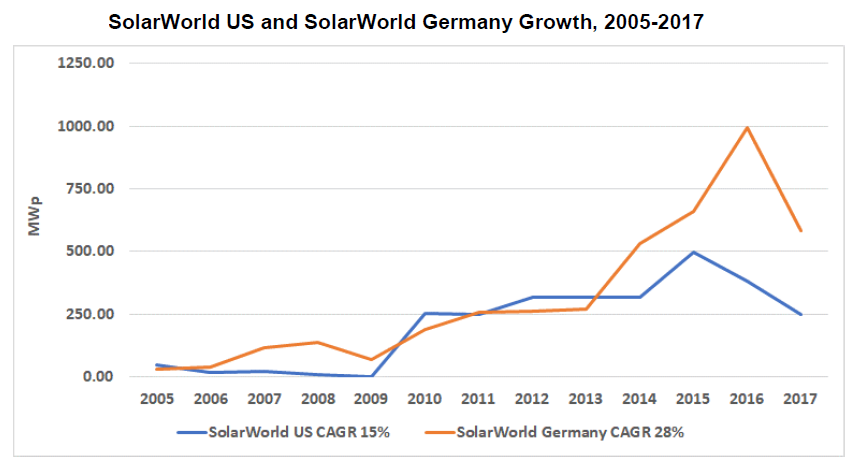 Paula Mints is founder of SPV Market Research, a classic solar market research practice focused on gathering data through primary research and providing analyses of the global solar industry.  You can find her on Twitter @PaulaMints1 and read her blog here.