In 2018, the US market for PV deployment is estimated at ~12-GWp. As the US does not have sufficient domestic cell manufacturing capacity to meet its demand, most of the 12-GWp will be met by imports of cells or, modules. Following the implementation of cell/module tariffs there were, as expected, new capacity announcements in the US, primarily for module assembly. If all the current announcements came true it would add an additional 4.2-GWp of module assembly and 1.7-GWp of cell manufacturing (thin film and crystalline) capacity to the US. First Solar (FSLR) is responsible for 1.3-GWp of the new module assembly and cell capacity announcements. 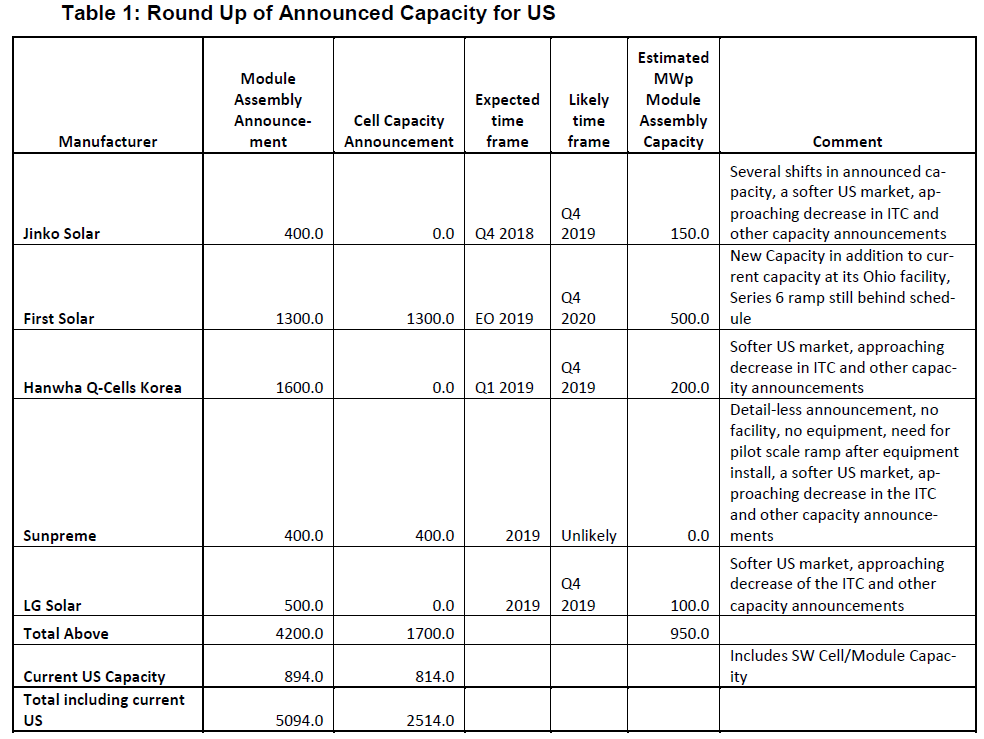 Including current US capacity, even if all the module assembly and cell manufacturing capacity announcements came to pass the US would still not have enough cell and module capacity to fulfill its demand. Module assembly is faster to establish but primarily requires imported cells. With tariffs on cell imports above 2.5-GWp, someone, somewhere along the value chain is going to eat margin that is, either the importer will absorb the tariff, or the domestic buyer will absorb the tariff, or the end user will pay a higher price for the PV installation.

In a price-taking industry such as the solar industry, the end user rarely chooses to absorb the higher price. Solar industry participants have little to no control over the price function as they are actors in a highly competitive industry where end users have no conception of manufacturing costs and there is an entrenched and well-funded competitor – conventional energy. Climate change crisis aside (and it should not be put aside), the conventional energy infrastructure is in place and it is very difficult to replace it with the renewable energy technologies. Habits will need to change, education will need to take place, new infrastructure developed and nascent technologies (such as storage) need to mature.

And frankly, adding module assembly capacity alone without additional cell capacity will not cut it.

The US needs new cell capacity and given the cost of new manufacturing capacity, manufacturers will need to consider whether the markets in the US, Canada, Mexico and countries in Central and South America will be worth the effort. The US offers a large market, but it faces a decreasing ITC, a lack of Federal government support, and then there are the tariffs. The US has yet to feel the full effect of the Trump Administration’s tariff, um, strategy. On a positive note, individual states are stepping up with programs for community solar and residential solar with storage while retaining an interest in utility-scale solar deployment.

Individual state plans aside, if the US wants to encourage domestic cell manufacturing it will need to invest, incentivize, exercise caution and have patience. Caution because no one needs another Solyndra, and patience because cell manufacturing is a years-long plan, not an overnight, instant gratification-satisfying success.

Taking the announcements in Table 1 one-by-one:

Jinko Solar (JKS): Announced a multi-gigawatt module deal with NextEra (NEE) as well as a module assembly facility in Jacksonville, Florida. Shifting announcements about capacity followed with rumors stabilizing at an expected 400-MWp and planned commercial output in Q4 2018.
Status: not going to happen in Q4 2018, look ahead to Q4 2019 and potentially 150-MWp.

First Solar (FSLR): Plans to expand its Ohio facility to 1.6-GWp of series six, but, hold on, series six is slow out of the gate and the company’s expected full capacity date of EO 2019 is not entirely reasonable given the history of its series six ramp problems. Status: Likely to be additions, though not the announced volume.

Hanwha Q-Cells Korea (HQCL): Announced 1.6-GWp of new module assembly capacity by Q4 2019. This is a reasonable timeframe to establish some degree of module assembly though 1.6-GWp is a stretch. The company needs to decide whether the investment, as well as the higher cost of manufacturing in the US, is worth the market opportunity. Status: Likely to add a fraction of the announced capacity.

Sunpreme: Out of the blue the company announced 400-MWp of monocrystalline bifacial cell and module capacity in Texas with manufacturing and product availability in 2019. Could be a press release gone awry. Given that the company did not offer detail about whether it had a building in mind or, if the capacity would be greenfield or any detail about equipment let alone detailing a reasonable pilot production scale up schedule the status is: Give me a break.

LG Solar (066570.KS): Announced 500-MWp of module assembly capacity at its facility in Alabama for its 60-cell premium residential rooftop product. LG has not announced a date for equipment move-in, and even module assembly requires a period of pilot scale production. The target date for commercial product availability is Q4 2019. LG will face the same market issues and additional costs as other manufacturers. Status: Likely to move ahead with a degree of module assembly in the US at a lower volume than announced.

Tesla (TSLA) Solar Shingles: In its Q3 call, Tesla gave an update on its solar shingle product. In sum, production has been delayed from Q4 2018 to the first half of 2019 due to the “complexity” of the product. Tesla did not give details on expected efficiency, manufacturing cost, price/Wp when available, and what the company means by complexity. Translation … this is a highly complex and expensive product to manufacture likely fated to serve a niche market of people who want to own a Tesla roof. Status: Expect more delays. Final comment, there is a long history of companies announcing solar shingles and tiles as a great innovative idea whose  time is here now … still not here for a variety of very good technical reasons. Tesla solar is using more of its imported Panasonic HIT modules, rebranded as Tesla. This is
outsourcing.

SunPower (SPWR): SunPower took a gamble that its acquisition of SolarWorld’s Oregon facility would help it earn an exemption for its IBC cells and modules. Maybe it worked or, maybe it won the exemption based on its IBC technology alone. Whatever the reason, the company is plunging ahead with its acquisition and will upgrade the Oregon facility’s module assembly for its P-Type modules (imported cells). Status: This one’s a go, albeit an expensive one. Expect a revival of some of the Oregon facility’s monocrystalline capacity and an upgrade to its module assembly.

The Lesson is about Risk and Reward

Manufacturing in the PV industry is akin to an acrobat balancing on a very thin high wire where the acrobat is the manufacturer and the very thin high wire are the margins the industry has accepted overtime. As the industry has effectively commoditized its cell/module product, there are very few high value markets for manufacturers. Competition is a battle for share where the winners are those who can best absorb margin pain.

A decision to establish module assembly or cell manufacturing in a market is not taken lightly. The US is an expensive manufacturing location. Manufacturers serious about establishing a base in the US need to accept that their costs will be higher than in other countries and hope for an expanding market to make it worth the expense and effort.

One example of a US manufacturing failure for a variety of reasons is Suntech. In 2009 China-based and former industry leading manufacturer Suntech chose Arizona for its first 50-MWp module assembly facility. By 2013 it had shuttered the facility.